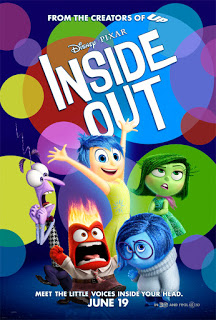 Pixar brings us inside the head of a pre-pubescent girl in Inside Out. The emotions of Joy (Amy Poehler), Sadness (Phyllis Smith), Fear (Bill Hader), Anger (Lewis Black), and Disgust (Mindy Kaling) control the personality of 11 year old Riley (Kaitlyn Dias) from the master control inside of her head.  When Riley and her parents (Diane Lane and Kyle MacLachlan) move from Minnesota to San Francisco, Riley begins to experience mood swings, which gets worse when her core memories, along with Joy and Sadness, find themselves lost in the outer reaches of Riley’s long term memory.  Joy and Sadness begin the journey to make it back to master control before all the core elements of Riley’s personality are destroyed.

There was a time when Pixar was considered the undisputed champion of animation, having practically revolutionized the current standard of CGI animated films.  However, Pixar has been having a rough time over the last five years or so, as they began to focus more on sequels of past films, with the only original story in that time being 2012’s Brave.  While the films released were still somewhat decent, many began to criticize Pixar for their increased lack of originality.  While there are still multiple sequels in production, this year sees the release of not one, but two original Pixar stories.  The first of these is Inside Out, which is directed by Pete Doctor (Up).

Up is probably best remembered for its opening montage, which gave the touching and sad backstory for the film’s protagonist Carl Fredricksen.  Inside Out sort of builds upon Up‘s dramatic opening, as the film frequently contrasts the bright and colourful comedy in master control with the much more grim reality of Riley’s life.  At the centre of all this is the lead emotion Joy, who has grown used to the fact that all the memories from Riley’s early life were generally happy ones.  This is why Joy begins to panic after Riley begins to experience mood swings after her move, which results in her being anything but happy.  Joy is particularly fearful of the interference of Sadness, who turns happy memories sad when she touches them.  However, when Joy and Sadness find themselves in the outer reaches of Riley’s head, they slowly learn that they are both important aspects of Riley’s personality.

Like its central characters, those watching Inside Out will experience a wide range of emotions.  Some scenes of the film are very funny, while others are quite sad and dramatic.  It can be very tricky for a film to balance sudden shifts in tone, however I would have to say that Inside Out accomplishes this quite nicely.  It also helps that the mood swings that Riley experiences are something that kids of her age will likely greatly relate with.  The ultimate message of Inside Out is that no one emotion is better than the other and they will have to all work together to create the best personality.

Altogether, Inside Out shows that Pixar still has the abilities to create funny and touching original stories.