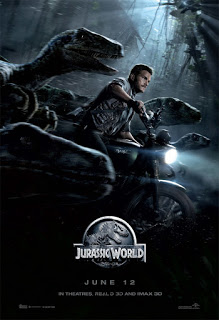 The park is finally open in Jurassic World.  Two decades after John Hammond’s original vision, the dinosaur theme park on the Central American island of Isla Nublar is finally open and thriving.  However, the pressure in on the park’s operations manager Claire Dearing (Bryce Dallas Howard) to create new exciting attractions to keep up the interest of the park goers.  As such, Jurassic World is preparing to unveil its new genetically modified hybrid dinosaur Indominus Rex.  However, when this vicious new dinosaur gets out of control, Claire and Velociraptor trainer Owen Grady (Chris Pratt) have to stop the Indominus before it reaches the main park and its 20,000 visitors, including Claire’s two nephews.

22 years ago, Steven Spielberg’s Jurassic Park was unleashed onto the world.  I was only 11 years old when I went to see the film in the theatre and experienced both awe and terror (I remember covering my eyes and ears during the big T-Rex attack).  The film was followed by the sequels The Lost World: Jurassic Park (1997) and Jurassic Park III (2001), neither of which would hit the same critical or box office highs as the original.

Jurassic World, directed by Colin Trevorrow (Safety Not Guaranteed), returns to the island of the original film, where the problems surrounding a dinosaur theme park has apparently been solved and Jurassic World is now a thriving tourist attraction.  Entrepreneur John Hammond has now long since passed away and the park is now owned by Simon Masrani (Irrfan Khan), under the operation of Claire Dearing.  While folks such as Masrani care about the safety and enjoyment of the park’s visitors, others such as InGen head of security Vic Hoskins (Vincent D’Onofrio) care more about the possible military use of trained dinosaurs.
Jurassic World is probably the sequel to Jurassic Park that comes the closest to recreating the feel the feel of the original.  The film features a number of direct references, such as the return of BD Wong as head scientist Dr. Henry Wu or a return to the original Jurassic Park visitor’s centre.  However, the film doesn’t have the same human element as the 1993 original.  Chris Pratt and Bryce Dallas Howard are OK enough in the lead roles, however they don’t have the same charm as the cast of the original.  Chris Pratt is arguably the most likable of the cast members, however his characterization is marked early on by a number of causally sexist comments Owen makes towards Claire.
Then there are Claire’s nephews of Gray (Ty Simpkins) and Zach (Nick Robinson).  It really seems obligatory for a film in this series to have some of the focus be on child characters.  While Gray is somewhat tolerable, and actually quite knowledgeable, Zach is pretty irritating from the start and is responsible for many dumb decisions that the kids make.  Another very irritating character is Vincent D’Onofrio as Vic Hoskins, but since he is playing an antagonist, I suppose it is slightly more forgivable.
For what Jurassic World is lacking in the human element, it more than makes up with the dinosaurs.  The main threat is the genetically modified Indominus Rex, which is made up of T-Rex DNA mixed with a number of classified components.  The dinosaur attacks in the film actually get quite intense at times and, like the original, this is a film that will probably scare very small children.  However, there is also a great dinosaur set-piece at the end, which was quite enjoyable to watch.
There was probably no real way that Jurassic World was going to be able to match Jurassic Park, which was truly a once in a lifetime experience.  However, despite some irritating and unlikable characters, Jurassic World still had some quite enjoyable dinosaur action, which made the film worth checking out.