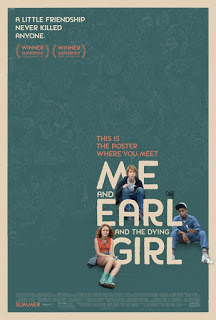 An amateur filmmaker develops a connection with a girl with cancer in Me and Earl and the Dying Girl.  Greg (Thomas Mann) is a high school senior, who is barely visible to the various cliques at his school, while spending much of his free time making parodies of classic movies with his “co-worker” Earl (RJ Cyler).  Greg is informed by his parents (Nick Offerman and Connie Britton) that his classmate Rachel (Olivia Cooke) has been diagnosed with leukemia.  Despite the fact that Greg barely knows Rachel, he is encouraged by his parents to go and spend time with her.

Me and Earl and the Dying Girl is an adaptation of the 2012 novel by Jesse Andrews, who also wrote the film’s screenplay.  The film can be best described as a mix between being a quirky indie comedy and a heart-wrenching drama.  The story of the film is narrated by Greg in the form of a story he is writing.  Throughout the course of the film, Greg goes from barely knowing Rachel to being quite close friends with her, even though on-screen titles throughout the film warn that this friendship is doomed.

Probably the most enjoyable aspects of Me and Earl and the Dying Girl is the fact that Greg and Earl are fans of classic art house films and have set out to make their own badly-made parodies of films from Apocalypse Now to A Clockwork Orange.  Many of these film parodies are shown throughout the film and they are an absolute blast to watch.  They are almost somewhat reminiscent of the sweded films from Be Kind Rewind, even though these parodies are given some ridiculous new premises.

As enjoyable as these film parodies are, they are only icing on the cake that is the growing connection between Greg and Rachel.  As Rachel begins to undergo cancer treatment, Greg spends much more of his time with her and he even starts trying to make a film for her, even though he is not sure what it will be about.  Me and Earl and the Dying Girl gets quite heavy in the latter going and more than a few tears are going to be shed while watching this film.

Me and Earl and the Dying Girl is a film that I went to see knowing almost nothing about it, other than the fact that it has been receiving a lot of acclaim, including multiple awards at Sundance.  I am now very glad that I saw this film, which will make you laugh before it makes you cry.