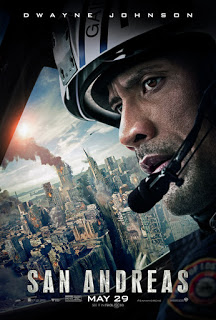 The west coast of the United States is decimated by a large magnitude earthquake in San Andreas.  Ray (Dwayne Johnson) is a rescue-chopper pilot, who is in the middle of a divorce with his wife Emma (Carla Gugino) and tries to maintain a close relationship with his daughter Blake (Alexandra Daddario), who is about to head off to college.  When the largest-ever earthquake happens along the San Andreas fault, Blake finds herself trapped in San Francisco.  This results to Ray and Emma to team together and make the trip across California from Los Angeles to save their daughter.

The disaster film genre is one with a tried and true formula.  These films often feature a large cataclysmic event, which is seen though the eyes of a handful of protagonists.  Even though there is much death and destruction seen on screen, the audience is often reassured by the fact that the heroes of the film will likely make it out unscathed.

I have probably been going to see disaster films as far back as Twister in 1996.  I can say that I have typically been a fan of the genre, which has been perfected by director Roland Emmerich in films such as The Day After Tomorrow and 2012.  While San Andreas pretty competently follows the disaster film formula, there was something different about my viewing experience.

While there have been many disaster films released after 9/11, this is the first time that I have seen such as film and found it to be a numbing experience.  Perhaps the sight of Los Angeles and San Francisco crumbing to the ground is a little too close to those events from 2001.  Or maybe it’s because there have been real disastrous earthquakes in the world, including the recent one in Nepal, which makes it not feel right to watch this level of destruction for entertainment.

I’m not entirely faulting San Andreas for my opinion of the film and there are plenty of things in the film I enjoyed, such as Paul Giamatti as the obligatory scientist who knows everything or Ioan Gruffudd as Emma’s architect boyfriend, who turns out to be a bit of a cowardly jerk.  I would probably give San Andreas a mild recommendation, even though it’s no longer fun to watch this kind of stuff on the big screen, with there being so much real death and destruction in the world.