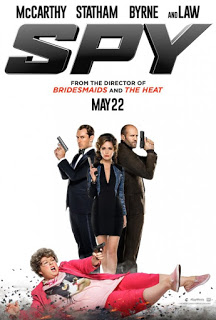 Melissa McCarthy becomes a secret agent in Spy.  Susan Cooper (McCarthy) is a CIA analyst, whose job is to guide her partner Bradley Fine (Jude Law) on his missions.  Fine goes on a mission to recover to nuke from Rayna Boyanov (Rose Byrne).  However, when he goes down, Susan offers to go into the field in his place, much to the chargin of Rick Ford (Jason Statham), who goes rogue on his own person vendetta against Rayna.

Spy is an espionage spoof, which reunites Melissa McCarthy with director Paul Feig (Bridesmaids, The Heat).  The film plays off many of the same beats of the James Bond franchise, whether it’s the opening credit sequence or the presentation of gadgets before a mission.

It can probably be said that Melissa McCarthy is probably a love her or hate her comedian.  Since she broke out in Bridesmaids, McCarthy has developed a formula for herself, which often involves her going into foul-mouthed tirades.  While much of that is present in Spy, there is also a lot of physical comedy by McCarthy, including the fact that Susan tends to faint and/or vomit at the sight of violence.  There is also the inherent comedy of a heavyset middle-aged woman participating in some highly choreographed fight sequences.

As a whole, Spy is a good mix of comedy, with a pretty decent espionage plot.  Rose Bryne seems to be having fun playing the icy villainess Rayna Boyanov.  Also, Jason Statham, who hasn’t really done comedy since his wise-cracking early work in Guy Ritchie’s films, really shines in the film by essentially spoofing his own screen persona.  It’s really fun seeing Jason Statham be himself throughout the film, even though he is given some ridiculous dialogue, such as the time he reattached his severed arm (with his other arm).

It can also be said that Spy is a bit of an empowering movie, as Susan tries to make a name for herself in the somewhat sexist world of espionage.  Despite having a supportive female supervisor (Allison Janney), Susan is given somewhat off-putting cover identities, such as a cat lady, and is given her spy gear in the form of a number of unflattering hygiene products.  There is also the Italian contact Aldo (Peter Serafinowicz), who is repeatedly feeling up and coming on to Susan.  However, Susan eventually moves past all this to come into her own during the mission.  In addition, despite the marquee names of Jason Statham and Jude Law, this is very much a female driven film, with much of the screen time being given to Melissa McCarthy, Rose Bryne, and Miranda Hart as Susan’s friend and analyst Nancy.

Altogether, Spy is a quite fun and enjoyable espionage spoof.