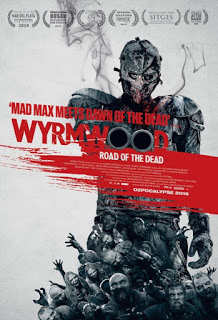 In a post-apocalyptic Australia, a virus has turned nearly the entire population into bloodthirsty zombies.  Barry (Jay Gallagher) is one of a handful of survivors, which also includes Benny (Leon Burchill) and Frank (Keith Agius), who are immune to the virus and struggle for survival.  In the meanwhile, Barry’s sister Brooke (Bianca Bradey) has been kidnapped by a team of gasmask-wearing soldiers and is subjected to a number of experimentations by a mad scientist.  Barry, Benny, and Frank travel across the Australian landscape, in their zombie-fuelled truck, in the hopes of finding and rescuing  Brooke.

Wyrmwood is a post-apocalyptic zombie film, described as Mad Max meets Dawn of the Dead.  This description is apparent right from the start of the film, which gets right into the action as Barry, Benny, and Frank in full armour fight off a horde of zombies.  However, Wyrmwood turns out to be much more than that, which includes having a twisted sense of humour, including the sight of a mad scientist in a hazmat suit dancing to KC and the Sunshine Band, while performing his grisly experimentations.

While Wyrmwood features many of the basic tropes of zombie films, it also creates a new set of rules.  One of these involves how the zombies exhale a flammable green gas, which happens to work pretty well as a combustible fuel source.  The film also features an interesting twist on the “slow zombie vs. fast zombie” debate.  As is usually the case with these types of films, the zombie threat is eventually put aside for the more dangerous human threat, as a group of crazed soldiers reveal themselves as the real villains of the film.

Much more of an action film than horror, Wyrmwood features some great action set pieces with plenty of bloody violence. The standout of the cast is Bianca Bradey as Brooke, who is involved with some of the best sequences in the film, including a very acrobatic zombie fight in the early going.  Brooke most definitely stands out as one of the most memorable kick-ass horror heroines.  However, that doesn’t mean the rest of the cast doesn’t get their moment to shine.  With his armour and hockey mask, Barry has one of the more iconic looks of the film, including being featured on all the advertisements.  Benny is present mostly for comic relief, which he accomplishes in a very Australian manner.