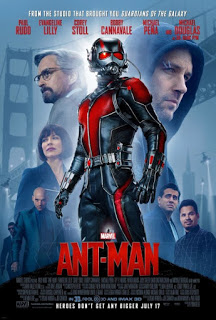 An ex-con becomes a size changing superhero in Ant-Man.  Scott Lang (Paul Rudd) is a cat-burglar, who has just been released from prison.  Desperate to be reunited with his daughter, Scott accepts a burglary job from his old cellmate Luis (Michael Peña) and ends up stealing a strange suit that causes Scott to shrink down to the size of an insect.  The suit belongs to Dr. Hank Pym (Michael Douglas), who wants Scott to break into his former company and steal the Yellowjacket costume from Pym’s former protege Darren Cross (Corey Stoll), who plans to use the shrinking technology in nefarious ways.

In a similar vein the last year’s Guardians of the Galaxy, Ant-Man is the film adaptation of a lesser known Marvel comics superhero.  This film version of Ant-Man was under development by Edgar Wright for a decade, before he departed the project over creative differences and was replaced by Peyton Reed (Yes Man), though Wright still receives a screenwriting and story credit.

Ant-Man is a typical superhero origin story, though it is notable for a strong influx of comedy.  This includes the dialogue by the likes of Paul Rudd and Michael Peña, as well as various sight gags that take advantage of the small world that Ant-Man fights in.  While the film doesn’t hit the same highs as Guardians of the Galaxy, it still ended up being a fun film to watch.

If there is one thing that is somewhat working against Ant-Man, it is the multiple connections to the Marvel Cinematic Universe.  These connections, which includes a brief appearance by Anthony Mackie as Falcon, really seem shoehorned in and unnecessary to the plot of the film.  It was likely Disney/Marvel’s desire to have these connections in the film that resulted in Edgar Wright departing from the project.  While replacement director Peyton Reed did an OK enough job, I am really curious of what type of film Ant-Man would’ve been if Wright was still on board.  As it stands, Ant-Man is a fun, yet ultimately formulaic, action/comedy.

One thing that can definitely be said about Ant-Man is that it has a very eclectic cast, with Paul Rudd being a somewhat unlikely choice to play a superhero.  Michael Douglas does the aged mentor thing as Hank Pym, while Evangeline Lilly plays his somewhat hot-headed daughter Hope van Dyne.  In addition, Corey Stoll is doing his best Lex Luther as lead antagonist Darren Cross, while Bobby Cannavale gets a decent amount of screen time as police officer Paxton.

Altogether, while the shoehorned connections to the MCU stick out a little too much, Ant-Man still turned out to be a fun action/comedy.