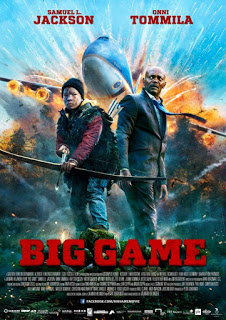 The President of the United States relies on a 13 year old Finnish boy for survival in the action/adventure Big Game.  Oskari (Onni Tommila) is a boy in Northern Finland, who is sent out into the wilderness on a coming-of-age hunting trip.  He comes across the escape pod of US President William Allen Moore (Samuel L. Jackson), who was forced to eject from Air Force One, after it was attacked by the terrorist Hazan (Mehmet Kurtulus), with the help of traitorous secret service agent Morris (Ray Stevenson).  While the Vice President (Victor Garber) tries to locate Moore with the help of CIA expert Herbert (Jim Broadbent), Oskari sets out to guide the President to safety.

Big Game is the type of film that doesn’t get made too much anymore.  The film is reminiscent of the adventure films that came out all the time in the 1980s and 1990s.  While best classified as an action/adventure, there is also quite a bit of comedy in Big Game.  Much of the comedy comes at the expense of Samuel L. Jackson, who plays the President as a bit of a wimp, who is more about looking tough than being tough.  Of course, the film also features many Jacksonisms, including a very crowd-pleasing line towards the end.

Even though Samuel L. Jackson receives top billing in the film, the film is all about Onni Tommila as Oskari.  It is sort of amazing that a 13 year old Finnish boy is able to stand on equal footing with a star as large as Jackson.  Oskari’s coming-of-age journey is at the centre of the plot of the film and is in direct contrast to Hazan, who is also on a hunting trip, albeit for the “Big Game” of the President.  The plot of Big Game is simply Oskari and the President on the run from Hazan and Morris, which includes some quite enjoyable action set pieces, including one involving a helicopter and a freezer.

While Oskari and the President’s wilderness adventure was a joy, the scenes of the Vice President and CIA searching for them came off as little more than exposition, even though it does feature an interesting cast of characters, such as Victor Garber as the Vice President, Ted Levine as General Underwood, and Felicity Huffman as the director of the CIA.  Also, Jim Broadbent steals the show somewhat as CIA operative Herbert, who is in charge of the rescue.