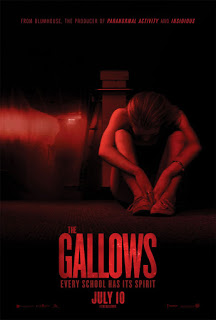 Four teens are tormented by a vengeful spirit in their high school in The Gallows.  In 1993, Beatrice High School student Charlie Grimille was hung in a tragic accident, while performing in the school play entitled “The Gallows.”  Twenty years later, the drama class at the school is preparing to perform the play again.  Football jock Ryan (Ryan Shoos) and his cheerleader girlfriend Cassidy (Cassidy Gifford) dread everything about the play and make fun of Reese (Reese Mishler) for taking the play seriously, presumably because of the crush he has for lead actress Pfeifer (Pfeifer Brown).  Ryan convinces Reese to come with him and Cassidy to break into the school at night and sabotage the set.  However, they quickly find out that the ghost of Charlie Grimille is active in the school and he is looking for vengeance.

In the last five or six years, found footage has become one of the most overused horror tropes.  The blame can easily be put on the success of Paranormal Activity and the fact that these films are relatively inexpensive to produce.  Sometimes found footage is done effectively, with me being big fans of both The Blair Witch Project and the original Paranormal Activity, however many times it is just a cheap filmmaking gimmick that will leave the viewer feeling nauseous.

The Gallows tries to shake up the overused found footage trope by mixing it with some slasher film conventions.  Not only is there a vengeful ghost of a dead student walking the halls of this high school at night, but said ghost wears an executioner’s mask and attacks people with his noose.  First time filmmakers Travis Cluff and Chris Lofing are shameless in their copying of existing films in both the slasher and found footage subgenres, with there being shots directly lifted from both Halloween and The Blair Witch Project respectively.

The question that has to be asked in regards to every found footage film is “why are they even filming this?”  I let out a groan at the start of the film when it was shown that this footage is apparently part of a police evidence file.  The film switches between multiple cameras, ranging from the main camcorder to phones using a “night vision app.”  There is one moment that uses this multiple camera format to show events that happened before the aftermath is discovered by the other characters, even though the editing is somewhat sloppy and jarring.

The Gallows copies another found footage trope, in how the entire cast is using their real names, even though some have different surnames.  The primary cameraman for at least the first half of the film is Ryan, who is probably representative of all the worst aspects of “bro culture.”  Ryan is heard shamelessly mocking Reese for quitting the football team and focusing on the very “unmanly” activity of drama.  It is Ryan who comes up with the idea to break into the school at night and sabotage the play’s set, in the hopes that it will be canceled.

Ryan is exemplary of everything that is wrong about The Gallows.  He is an unlikable jerk of a character, which made me want to enter the screen and kill him myself.  That is not the right way to make a horror movie.  For a film like this to truly be scary, you have to actually care about the characters in the film.  Even somewhat sympathetic characters like Reese make stupid decisions in the film, which makes the action way more laughable than scary.

It is also obvious that they are blatantly trying to make the ghostly antagonist of Charlie Grimille into some sort of modern horror icon, like Michael Myers or Jason Voorhees.  The film features some very blatant foreshadowing in the first act when the characters are in the costume department and come across the executioner’s mask from the original 1993 play.  They weren’t going to show a mask like that, without the ghost appearing later on wearing the thing.  In fact, probably the most redeeming factor of the film is that the ghost somewhat looks cool, even though he highly resembles The Scarecrow from Batman Begins.

To put it bluntly, The Gallows is a complete waste of time and a perfect example of how formulaic mainstream horror films have become, particularly those released by Blumhouse Productions.