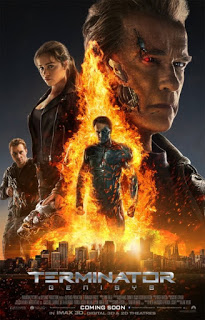 Arnold Schwarzenegger returns to his most famous role in this reboot of the Terminator franchise.  At the conclusion of the war against Skynet and the machines, John Connor (Jason Clarke) sends Kyle Reese (Jai Courtney) back in time to project his mother Sarah Connor (Emilia Clarke).  However, something changed in the timeline, which resulted in Sarah already being a capable fighter, who is accompanied by an aged Terminator (Schwarzenegger), who has been her guardian since childhood.  John and Sarah travel forward in time to 2017 to stop the launch of an operating system called Genisys, which is truly Skynet.  However, their plan is disrupted by none other than John Connor, who was captured by Skynet and turned into the T-3000 nanomachine hybrid.

It has now been 31 years since Arnold Schwarzenegger first had his breakthrough role in 1984’s The Terminator.  The film was followed by three sequels with varying degrees of success and now Terminator: Genisys sets out to reboot the franchise’s timeline, while trying to remain faithful to what came before.

From a concept standpoint, the film has some fairly clever ideas.  67 year old Schwarzenegger’s aged appearance is explained by the fact that The Terminator’s human tissue ages just like everyone else.  This Terminator has become somewhat of a father figure for Sarah Connor, complete with her calling him “Pops.”  Another somewhat interesting concept is the fact that this film’s version of Skynet comes from modern society’s obsession with technology, which allows humanity to enslave themselves without being aware of it.

Despite some interesting ideas, Terminator: Genisys is somewhat lacking in its execution.  While the film is OK enough, it does come off as a somewhat generic action blockbuster.  In fact, the biggest selling point of the film is the nostalgia factor of watching Arnold Schwarzenegger return to the series, which begins with a fight scene of him fighting a younger version of himself.  Emilia Clarke (Game of Thrones) is passable as the new Sarah Connor, though Jai Courtney doesn’t really hold a candle to Michael Biehn from the original.  It’s the shame that the marketing for the film gave away the twist that John Connor is the film’s main antagonist, even though I’m not sure how I think about the very CGI-heavy T-3000.

It would probably be fair to say that Terminator: Genisys is a somewhat unnecessary reboot of the franchise, which is only really cashing in on a familiar name.  However, that’s not enough for me to completely write off the film and it was still an OK enough viewing experience.