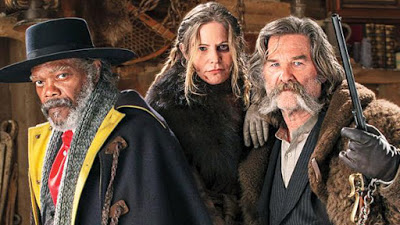 The teaser trailer has arrived online for Quentin Tarantino’s The Hateful Eight (or H8ful Eight as it’s spelled in the marketing). In a cheeky fashion, the film is being hyped as Tarantino’s eighth film, even though it technically could be called his ninth or even tenth, depending on how you count the films in his filmography. Either way, the film is continuing the director’s Western phase, which began with Django Unchained, even though some elements of this film also seems highly reminiscent of Reservoir Dogs, with it being great seeing both Tim Roth and Michael Madsen returning to the Tarantino fold, joining the main three of Kurt Russell, Samuel L. Jackson, and Jennifer Jason Leigh. With a planned 70mm presentation, The Hateful Eight will definitely be a must-see film this Christmas.