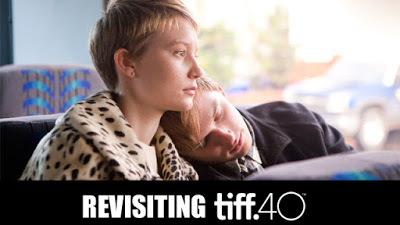 
2011 was a major turning point of my TIFF experience, since it had my largest ever film line-up. I saw 26 films over the course of that year’s festival, with notable screenings including Werner Herzog’s Into the Abyss, We Need to Talk About Kevin, the Midnight Madness film You’re Next, and Bruce McDonald’s “anti-sequel” Hard Core Logo 2. The film I chose to revisit from 2011 is Gus Van Sant’s romantic drama Restless.

I’ve been very hit and miss with the films of Gus Van Sant. While I’ve enjoyed his mainstream offerings, such as Good Will Hunting and Milk, I have not really been sure about his more experimental indie offerings. Admittedly I haven’t really seen films as Elephant or Last Days, however I saw Paranoid Park at TIFF in 2007 and was a little bit “meh” on it.

Thankfully, I can say that Restless is one of the Gus Van Sant films that I enjoy. While the subgenre didn’t really exist back in 2011, Restless can most definitely be classified along with The Fault in Our Stars and Me and Earl and the Dying Girl in the category of “tearjerker romances about girls with cancer.” Of course, Restless is only a tearjerker because the main love interest, played by Mia Wasikowska, is dying of cancer. That doesn’t stop her from being upbeat about life and her relationship helps pull the lead character of Enoch (Henry Hopper) out of his death-obsessed funk, which includes crashing funerals and playing battleship with the ghost of a kamikaze pilot.

Other than the cancer diagnosis, Mia Wasikowska’s character of Annabel Cotton is pretty representative of a “Manic Pixie Dream Girl,” who seems absolutely perfect for the main character. Heck, as a result of her character’s cancer treatment, Wasikowska is even sporting a pixie haircut for the entire film. However, the relationship between her and Enoch still feels natural and it is sad when the film reaches the inevitable point where Annabel has to die.

I have definitely become a big fan of Mia Wasikowska, dating all the way back to when she was a cast member on the first season of the HBO series In Treatment back in 2008 and the star of Tim Burton’s Alice in Wonderland in 2010. While Wasikowska was still a rising actress when I saw Restless, she would shine in subsequent roles, including Stoker, Only Lovers Left Alive, and Tracks. In fact, she was probably one of the best elements of David Cronenberg’s, otherwise disappointing, Maps to the Stars last year.

As for Gus Van Sant, he still remains a bit of a hit or miss director for me, though I can confidently say that Restless is one of the films of his that I like.