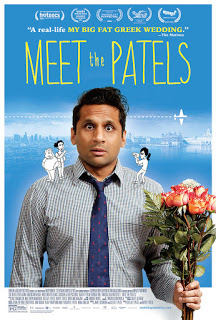 While growing up as a first-generation Indian-American, Ravi Patel lived a double life.  At home he maintained a traditional Indian lifestyle, while in the outside world he lived as a modern American.  This included his only meaningful, yet secret, romantic relationship with a red-headed girl named Audrey.  Shamed about living this double life, Ravi breaks up with Audrey right around the time his traditionalist parents decide to begin the matchmaking process to find an Indian woman for Ravi to marry; preferably also with the last name of Patel, since Patels usually marry other Patels (it’s a caste thing).  All while being filmed by his sister Geeta, Ravi goes on a worldwide search for the love in his life, while contemplating what it means to be an Indian man in a modern world.
It can be very hard respecting your culture, while also desiring to live a modern life.  In Meet the Patels, Ravi Patel is at a major crossroads of his life.  Even though he is reluctant to agree to the Indian matchmaking process, he doesn’t want to disappoint his parents, particularly his mother, who has a reputation of being one of the best matchmakers around.  It is interesting observing the Indian matchmaking process in the film, which includes biodata (aka relationship resumes), Indian matrimonial websites, and meeting girls at weddings. At one point it is noted at Ravi has 15 dates arranged for him all across North America, including many dates in Toronto.
Meet the Patels is framed by an animated version of Ravi giving an interview and also features a number of animated re-enactments. The use of animation helps add a certain charm to the film, which is already a fairly interesting character study. At the centre of this character study is Ravi’s complicated relationship with his family and his overall Indian identity. Then there was Ravi’s secret relationship with a girl named Audrey, which he felt ashamed about keeping secret from his family. This results in Meet the Patels being just as much an identity crisis as a film about romance.
All together Meet the Patels is an enjoyable story of a man trying to respect his culture, while also trying to to find his ideal love. Anyone who has ever had to deal with the dating practices of their culture is sure to relate to the things that Ravi Patel goes through in this very lovely documentary.
8 / 10 stars

LIKED IT
Meet the Patels opens today at Cineplex Yonge and Dundas. Stay tuned for my interview with Ravi and Geeta Patel, which will post in the near future.