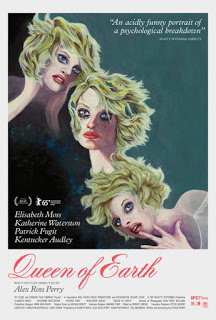 Two best friends drift apart while vacationing at a lakeside cabin in Alex Ross Perry’s Queen of Earth. Catherine (Elisabeth Moss) is a codependent young woman, who is taking the death of her father and recent break-up with her boyfriend James (Kentucker Audley) pretty hard. Catherine is invited to the cabin of her best friend Virginia (Katherine Waterston), however Virginia also invites her neighbour and new romantic interest Rich (Patrick Fugit) over, which creates a divide between the two lifelong friends. Contrasting the events with a similar trip the year previous, Catherine slowly experiences a full nervous breakdown over the course of this horrible week.

Directed by Alex Ross Perry (Listen Up Philip), Queen of Earth is a film that is hard to describe. Is the film a mumblecore drama? Or is it a psychological thriller? What about dark comedy? I suppose that ultimately, Queen of Earth is whatever you would make it.

The film is made up of a relatively small cast, which consists primarily of Elisabeth Moss (Mad Men), Katherine Waterston (Inherent Vice), and Patrick Fugit (Almost Famous). I think that all around the performances of the film are pretty solid, particularly since Moss and Waterston are playing two different versions of themselves, since the film features flashbacks to the year previous, where the roles between the two are reversed. As Virginia’s new boyfriend Rich, Patrick Fugit shows that he is quite good at playing an unsympathetic jerk, who just believes that Catherine is nothing more than a spoiled, entitled brat, who does not care about anyone but herself.

Catherine’s deteriorating mental health in Queen of Earth is visualized through a wilting salad by the side of her bed. It’s hard to decipher what exactly the film’s stance on mental illness is, since the other characters, particularly Rich, don’t believe there is anything wrong with Catherine and that this behaviour is just due to the fact that she has always been dependent on someone else.  This ultimately leads to Queen of Earth‘s somewhat sad conclusion.

While Queen of Earth features some decent performances by its leads, ultimately it is hard to decipher what exactly the film is trying to be and what the ultimate message is. I suppose I will just say that the film is an example of mumblecore psychosis.