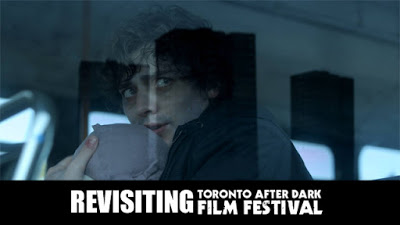 In celebration of the 10th anniversary of Toronto After Dark, I will be revisiting one film from each year of the festival. Please be aware that these discussions may include SPOILERS.


After one year away, Toronto After Dark returned to the newly renovated Bloor Hot Docs Cinema for its 2012 edition. Highlights from this edition of the festival included the Soska Sister’s American Mary, Rec 3: Genesis, and the British zombie comedy Cockneys vs Zombies, which won the festival’s audience award. One film that stood out as one of the real chillers of Toronto After Dark 2012 was the Irish thriller Citadel, which is the film that I am revisiting today.

Citadel, directed by Ciarán Foy, is a film that makes reference to the hoodie-wearing thugs that are predominant in the UK. In this case, the pregnant wife of Tommy (Aneurin Barnard) is severely beaten by a group of hoodies, leaving her in a coma that she eventually succumbs to. This results in Tommy suffering from major post-traumatic stress and agoraphobia, as he struggles to raise his young daughter Elsa on his own. Despite the support from a kind nurse named Marie (Wunmi Mosaku), Tommy is convinced that the Hoodies are going to come back for him and Elsa.

Citadel spends a good chunk of its running time trying to keep it ambiguous whether or not the Hoodies are truly a threat to Tommy or merely misunderstood kids. It isn’t really under Marie is suddenly killed by them when it truly becomes apparent that this threat is very much real. The trailers and posters for Citadel somewhat give away the fact that these Hoodies aren’t quite human and that their goal is to kidnap children and have them join their ranks.

All this leads to the tense climax, where Tommy joins a foul-mouthed priest (James Cosmo) to help rescue Elsa and destroy the apartment complex where the Hoodies have taken residence. I would admit that the climax was as effective on rewatch as it was at the original screening. This is definitely a horror film that is best experienced on the big screen.

Director Ciarán Foy followed up Citadel by being the hired hand on the somewhat disappointing Sinister 2. Hopefully, he will get to do his own films again, since Citadel is a horror film that really showed some real promise.