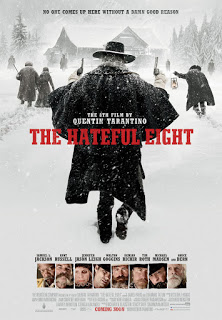 Note: This review is for the 187 minute 70mm roadshow cut of the film

Quentin Tarantino returns with the snowbound Western The Hateful Eight. Stuck in a blizzard, bounty hunter Major Marquis Warren (Samuel L. Jackson) hitches a ride with “The Hangman” John Ruth (Kurt Russell), who is heading into the town of Red Rock to deliver his bounty Daisy Domergue (Jennifer Jason Leigh). After additionally picking up in-coming Red Rock sheriff Chris Mannix (Walton Goggins), the group stops for shelter at Minnie’s Haberdashery, occupied by Mexican Bob (Demian Bichir), British hangman  Oswaldo Mobray (Tim Roth), cowboy Joe Gage (Michael Madsen), and Civil War veteran General Sandy Smithers (Bruce Dern). Ruth fears that one or more of these individuals might not be who they say they are and he entrusts Warren to help protect his bounty.

Quentin Tarantino returns with what is being hyped as his eighth film, even though the exact number is up for debate. The film is Tarantino’s second Western, following 2012’s Django Unchained, and it was shot in Ultra Panavision 70 and presented in an 187 minute roadshow presentation, complete with overture and intermission (a 167 minute digital cut of the film will be released wide). While on the surface, The Hateful Eight can be described as a Western, the film has just as much in common with Tarantino’s 1992 debut film Reservoir Dogs, particularly the fact that the bulk of the film takes place at the single location of Minnie’s Haberdashery. Another inspiration of Tarantino’s was John Carpenter’s The Thing, particularly involving the distrust between these eight individuals.

As with many of Tarantino’s films, The Hateful Eight is full of a whole lot of talking. While there are many who would criticize Tarantino for making a three hour long, dialogue-heavy film, there isn’t a single moment when what’s being said isn’t interesting. In fact, I’m more critical of the fact that Tarantino himself makes a voice-over cameo as the film’s narrator, who serves little purpose other than to provide exposition as certain points of the story. However, the narration does help at adding a Hitchcockian level of suspense to one scene.

To be completely honest, The Hateful Eight is probably a film didn’t really need to be shot in 70mm. In fact, it can be argued that Tarantino only presented The Hateful Eight in Ultra Panavision 70, the first film in that format since 1966, because of his love of classic cinema and shooting on film, rather than digitally. However, there still is some breathtaking cinematography in the film, particularly the snowy landscapes in the first act, accompanied by a new score by Ennio Morricone. While setting two thirds of the film in a cabin isn’t the best way to take advantage of 70mm, it is still great that Tarantino is keeping film alive in the digital era.

With a few exceptions, such as Jennifer Jason Leigh and Demian Bichir, most of the cast of The Hateful Eight have appeared in at least one previous Tarantino film. It was great seeing the return of Tarantino veterans Tim Roth and and Michael Madsen, both of whom were present in Reservoir Dogs more than 23 years ago. Those familiar with Tarantino will likely figure that all eight of these individuals won’t make it to the final reel, with the climax of the film getting quite bloody.

While The Hateful Eight is far from Tarantino’s best film, it was still an entertaining watch.