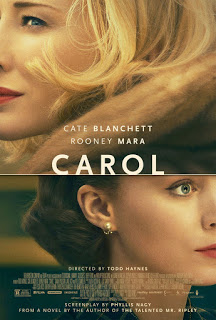 A young aspiring photographer has an affair with an older woman in Carol. Therese Belivet (Rooney Mara) is an aspiring photographer in her twenties working in a department store. One day she meets Carol Aird (Cate Blanchett), a middle-aged housewife, who is in the beginnings of a bitter divorce with her husband Harge (Kyle Chandler). Therese and Carol quickly strike up a friendship with each other, which slowly progresses into a more intimate relationship.

Director Todd Haynes returns for his first feature film since 2007’s I’m Not There.  Carol is based on the novel by Patricia Highsmith and deals with the lesbian relationship between the titular character and much younger aspiring photographer. Taking place during the 1950s, homosexuality is far from a culturally acceptable orientation and Carol’s husband is even using her previous relationship with childhood friend Abby (Sarah Paulson) as “moral” leverage during their divorce proceedings.

Despite the film’s title, it can be argued that the true central character of Carol is Therese, who learns more about herself over the course of the film. Therese starts off as a very shy individual and she becomes more sure of herself as her relationship with Carol progresses. As for Carol herself, she is already sure about who she is, though she is forced to live a lie because it is more socially acceptable for her to be a doting housewife. As such, this makes Carol’s husband Harge the villain of the film by default, even though all he wants to do is keep his family together, despite his controlling and jealous behaviour.

Carol features some very solid performances all around, particularly from Cate Blanchett and Rooney Mara in the central roles. However, that said, the film is little more than a tragically romantic melodrama. Carol is fall from the first film to deal with a “forbidden” relationship and in the context of the film’s time period, it isn’t too surprising how things turn out. While I thought that Carol was a fine film, I was not completely blown away by the plot of the film.

In some ways, my lukewarm reception to Carol probably has more to do with my overall relationship to the film’s director Todd Haynes. I have only seen two of Haynes’ previous films, 1995’s Safe and 2007’s I’m Not There, both of which I’ve had a similar reaction to as Carol. I’m sure the praise this film is receiving is well-earned, however I am probably ultimately not the biggest fan of Haynes’ films. That said, I do have to applaud Carol on the technical front, since Haynes opted to shoot the film on 16mm, which gives Carol a grainy and aged look to it, which is in complete contrast to the perfect looking digital films that dominate cinemas.

Altogether, I thought that Carol is a fine enough period romance, which is more about the performances than the plot itself.