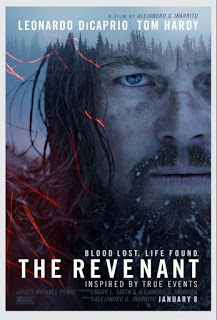 An injured frontiersman left for dead seeks revenge on the man who killed his son in The Revenant. Hugh Glass (Leonardo DiCaprio) is an experienced hunter and part of a group of fur trappers lead by Captain Andrew Henry (Domhnall Gleeson). Glass is critically injured in a bear attack and Henry instructs John Fitzgerald (Tom Hardy), Bridger (Will Poulter), and Glass’ half-native son Hawk (Forrest Goodluck) to look after Glass while the rest return to base. Impatient and only wanting to get paid, Fitzgerald plans to euthanize Glass and ends up killing Hawk when he tries to stop him, leaving Glass for dead. Barely able to move, Glass track Fitzgerald through the wilderness, desperate for revenge.

The Revenant is a wilderness survival film, which is inspired by the experiences of 19th century frontiersman Hugh Glass. Directed by Alejandro González Iñárritu (Birdman), the film follows glass on his perilous journey through the wilderness, as he seeks out revenge against John Fitzgerald for the murder of his son. However, after being brutally mauled by a bear, Glass is barely able to move with the hostile wilderness, which is made more hostile by the Arikara Native American tribe, who have been searching for the chief’s kidnapped daughter and attack and settler they come across.

Without a doubt, The Revenant is probably one of the bleakest films that I have seen. The film is barely on for five minutes, before there is a very brutal ambush on the fur trappers by the Natives. It only goes down from there, with there being many moments of the film to cringe at, whether it would be Glass trying to cauterize his wounds or him desperately eating a liver from a bison. When it is all said an done, The Revenant is not a film that I would rush out to see again.

However, despite the film’s bleakness, there is still a certain level of craft to The Revenant that can’t be ignored. Shot in both British Columbia and Argentina, the film features some breathtaking scenery of the snow-covered wilderness. Leonardo DiCaprio is most definitely giving it his all in the film, which is apparently the most difficult role he as ever played. Indeed, DiCaprio gives an almost silent performance in the film and is looking very grizzled for possibly the first time in his career. While it can indeed be argued that perhaps he is trying a little too hard to finally receive some awards recognition, it cannot be denied that DiCaprio’s performance in the film is quite captivating. The same can be said for Tom Hardy as the film’s primary antagonist, with Hardy demonstrating yet again how capable he is at playing despicable villains.