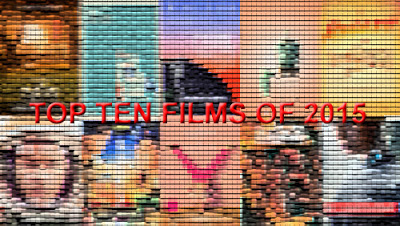 Another year has gone and it is time once again for me to list my top ten favourite films of the year. One thing that is quite apparent from this year’s list is that it is very unconventional. Only a handful of the films of my list this year received wide releases and there are no less than four documentaries among my favourites this year. That all said, I believe the films in my top five are particularly strong and I would recommend seeing all of them.

10. The Martian (review)
There were a lot of possible films vying for this tenth spot and I decided to go with Ridley Scott’s The Martian. The film is just pure escapism and I didn’t find the film’s 2 hour and 21 minute runtime to be long at all.

7. Raiders! (review)
The story of “the greatest fan film ever made” is just pure awesomeness and a very entertaining and even touching documentary.

4. Love & Peace (review)
It was towards the beginning of the year when I saw Sion Sono’s 2013 splatter comedy Why Don’t You Play in Hell (which I decided not to include in this list, despite my love of the film). I would later see many new Sion Sono films that played the festival circuit, including Tag and The Whispering Star. However, a very pleasant surprise for me was Love & Peace, which was a highly enjoyable mix of rock musical and comic fantasy. The film is quite different than Sion Sono’s other films and it ended up being a quite heartwarming watch.

2. Me and Earl and the Dying Girl (review)
Me and Earl and the Dying Girl is a film that many would easily write off as little more than a quirky indie drama. However, the film caught me off guard at the mid-point of the year to become one of my favourite films of the year. This is a film that makes you laugh, before it makes your cry and I am definitely glad that I caught this film.

1. Ex Machina (review)
Alex Garland’s Ex Machina reached the top of my favourite films of the year quite early on and I wasn’t able to find anything else that topped my love of this science fiction film. Ex Machina kicked off the breakthrough year for Swedish actress Alicia Vikander and I would still argue that her performance as Ava in this film is the best of those performances, even though it’s The Danish Girl that is getting Oscar buzz. In a perfect world, Ex Machina would receive just as much notice as the more elite pictures, but I will just have to settle on my own personal love for the film.