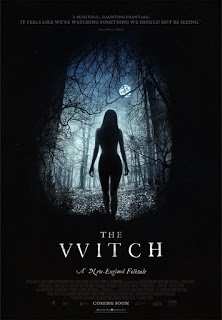 A family  in 1630s New England is torn apart by suspected witchcraft in The Witch. William (Ralph Ineson) and Katherine (Kate Dickie) live a devout Christian life with their five children on an isolated farm surrounded by woods. Beginning with the sudden disappearance of their newborn son, the family begins to experience an unexplained string of bad luck. Witchcraft is blamed for the family’s misfortune, with suspicion quickly falling onto oldest daughter Thomasin (Anya Taylor-Joy).

The Witch is a period drama, with some horror elements, about a family in the 1630s torn apart by suspected witchcraft. Described as “A New-England Folktale” first-time writer/director Robert Eggers bases the story of The Witch on real folklore and history of witches in New England. Set generations before the infamous Salem Witch Trials, many of the scenes in the film are inspired by real diary entries from the time period, complete with the film having an entirely Old English dialect.

Much of the story of the witch is told from the perspective of the family’s teenage daughter Thomasin. Thomasin inadvertently attracts suspicion on herself when she tells her young sister that she is a witch, in an attempt to scare her. However, this super religious family takes such descriptions seriously and the blame is quickly placed on Thomasin when the family’s problems go from bad to worse. The question that is asked throughout The Witch is whether there is truly a supernatural reason for the family’s bad fortune or if there is a more practical explanation that is being clouded by religious superstition. The film does end up providing an answer to that question, though I do wish somewhat that there was a touch more ambiguity to the story.

The Witch is a film that opts to be unsettling, rather than outright scary. Much of this is the result of the film’s score, which is filled with many screeching violins, which give off a somewhat unnatural sound. It really isn’t until close to the end when The Witch can truly be described as a horror film. Until then, the film is more of a family drama, with the odd freaky scene in the woods. In fact, it can be said that The Witch strikes a bit of a weird balance, since the film would likely be seen as too slow for hardcore horror fans, yet too intense for the casual moviegoer. The Witch is the type of genre film that is aimed at a more “mature” crowd, who don’t really mind watching a horror story told through a dramatic period framework.