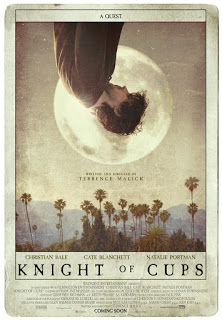 A writer searches for love and self in Los Angeles and Las Vegas in Knight of Cups. Rick (Christian Bale) is a screenwriter, who feels an emptiness in his life and has a rough relationships with his brother Barry (Wes Bentley) and father Joseph (Brian Dennehy). Rick has encounters with various women, including ex-wife Nancy (Cate Blanchett) and adulteress Elizabeth (Natalie Portman), who progressively bring him closer to finding his place in the world.

Knight of Cups is the latest film from director Terrence Malick. Infamous for having taken a 20 year hiatus between 1978’s Days of Heaven and 1998’s The Thin Red Line, Malick has been quite prolific as of late, with Knight of Cups being the first of three films he has coming out within the next year. As such, the question has to be asked whether Malick, now in his 70s, has been opting for quantity over quality in his latter career.

From a technical standpoint, Knight of Cups is an incredibly well-shot film. That’s not really a surprise, since Terrence Malick has been typically known for his excellent cinematography. However, Knight of Cups does suffer in the story department, which is essentially about an L.A. womanizer trying to find the perfect girl for himself. At least, that’s what I think the film as about, since Knight of Cups has an incredible incoherent narrative, with the bulk of the film’s dialogue being done through voice-over narration, which is one of Malick’s signature techniques.

Knight of Cups is told in eight chapters, each of which named for one of the cards in a tarot deck. The chapters each focus on Rick’s encounter with a various individuals, including rebellious woman Della (Imogen Poots), playboy Tonio (Antonio Banderas), model Helen (Freida Pinto), and playful stripper Karen (Teresa Palmer). Despite the film having a very stacked cast, most of them only appear for just their segment, with there also being cameos from the the likes of Joe Manganiello, Jason Clarke, and Armin Mueller-Stahl.

One of the possible explanations for the incoherent of Knight of Cups is that the film was shot without a proper script. Christian Bale only received a character description from Malick, with many of the actions in the film being completely improvised. Malick also utilized a process known as “torpedoing,” where characters were unexpectedly thrown into a scene. With all of the improvisation present in the film, it is no wonder that Knight of Cups doesn’t really feel fully developed.

To date, the only other Terrence Malick films that I have seen are The Thin Red Line and Tree of Life, with only the latter being a film that I truly love. While I may one day catch up with his early films Badlands and Days of Heaven, I have decided that Terrence Malick’s filmmaking style isn’t really my cup of tea and I have probably now seen enough of him to last a lifetime.