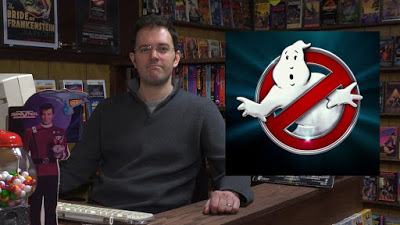 James Rolfe, best known by his webseries persona “The Angry Video Game Nerd” posted a video on his website Cinemassacre, which he described as a “non-review” of the upcoming reboot of Ghostbusters. Before I go any further, I should disclose that I haven’t watched the entire six minute and thirty second video, with me having stopped about a minute or so in. It can be said that I stopped watching the video for the same reason James Rolfe doesn’t plan on seeing the new Ghostbusters: “Why watch it, if you know you aren’t going to like it?”

I should probably say that I have nothing against James Rolfe’s decision not to see the new Ghostbusters film. It is completely understandable if you want to skip a film because you think that it is going to be bad. It is something that I do all the time. However, I do NOT agree with James Rolfe deciding to make a six minute plus video to tell us all that.

From the very brief portion of the video I watched, Rolfe was coming off a bit like a smug jerk, who believed that it was a unique concept that somebody would actually skip a film that they think they won’t like. It seems like Rolfe’s assumption is that everyone will be going to see the new Ghostbusters with the expectation that they are going to hate it and trash it afterwards. I can say for a fact that this is not true, since that is not at all the way that I perceive the new Ghostbusters film. In fact, I am somewhat looking forward to the film. Will I think that it will be on par with the original? Probably not. However, that doesn’t mean that it is not a film worth watching.

Through the release of the video, Rolfe is obviously pandering towards the internet following he has gathered over the last twelve years of his Angry Video Game Nerd web series. I will be first to admit that I am part of this fanbase and I even took the time to rent and review Angry Video Game Nerd: The Movie when it was released in 2014. When you think about it, James Rolfe is being a bit hypocritical criticizing a film two months before its released, when his own film isn’t exactly award winning material either.

Sometimes it is hard to tell where James Rolfe ends and the Angry Video Game Nerd begins. Rolfe is not wearing his trademark nerd outfit in the Ghostbusters video, so you can assume that he is doing this non-review as himself. However, the very purpose for this video is the fact that Rolfe is angry that there is a new Ghostbusters movie, which he believes is going to be incredibly bad. Once again, I haven’t seen the entire video, but you almost expect Rolfe to begin swearing and chugging Rolling Rocks.

Perhaps it is not fair that I am criticizing Jame Rolfe’s non-review of Ghostbusters, since I haven’t watched the whole thing. Maybe he does indeed make some valid point explaining why he doesn’t intend on seeing the new film. However, I frankly don’t really care what his reasoning is and a tweet probably would have sufficed.