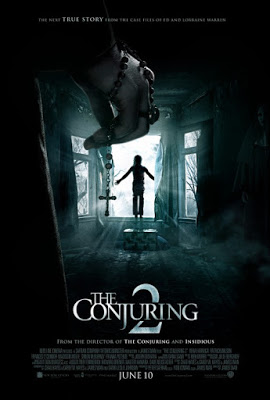 Ed and Lorraine Warren investigate a haunting in north London in The Conjuring 2. After assisting the Perron family, Ed and Lorraine (Patrick Wilson and Vera Farmiga) go on to investigate a haunting in  Amityville, Long Island, which gives them both public fame and increased criticism by skeptics. Meanwhile in Enfield, North London, Peggy Hodgson (Frances O’Connor) begins to believe that there is something evil in her home, after the family begins to experience paranormal activity centred around Peggy’s 11 year old daughter Janet (Madison Wolfe). Despite Lorraine’s fears about what may happen if she and Ed keep investigating the paranormal, the Warrens travel to London to observe what’s happening to the Hodgson family.

In 2013, The Conjuring became a box office hit for director James Wan (Saw, Insidious), who had since stated that he was going to step away from the horror genre he was known for. Well it turns that after moving on to direct last year’s Furious 7, Wan returns for one more scary film, as he brings another one of Ed and Lorraine Warren’s case files to the big screen. This time around, the focus is the case of the Enfield Poltergeist from the late 1970s, which is probably second only to the Amityville Horror, briefly touched upon in The Conjuring 2‘s prologue, in terms of being one of the Warren’s most infamous and heavily debated cases.

At the centre of this case is 11 year old Peggy Hodgson, who lives with her mother and three siblings in an old house in the London borough of Enfield. The activity begins with apparent poltergeist activity, such as moving furniture or toys moving on their own. However, the haunting quickly turns out to be more demonic in nature, as Peggy is seemingly possessed by the being haunting their house. While some such as British paranormal investigator Maurice Grosse (Simon McBurney) are convinced the activity is genuine, others such as psychology professor Anita Gregory (Franka Potente) believe that these “hauntings” are just part of the wild imagination of children. It is at this point that the Warrens are called in to observe the activity as representatives of the church, to ensure that the haunting isn’t declared a hoax like the much scrutinized Amityville haunting.

One of the elements that made The Conjuring so successful is that it took a subtle approach to the haunted house genre, focusing more on building up tension than having constant apparitions and jump scares. However, for The Conjuring 2, James Wan goes in a direction more akin to what he did in his other haunted house film Insidious, complete with Vera Farmiga’s Lorraine Warren having “out of body” psychic visions. It is during these visions that she finds herself tormented by a demonic nun (Bonnie Aarons), which seems to be a warning about future tragic events. While the inclusion of this physical antagonist does make The Conjuring 2 a much more visceral horror film than its predecessor, I do have to say that a scene involving the nun is probably one of the most tense of the film.

It has almost become a cliche at this point to advertise horror films as being “based on true events,” despite the fact that Ed and Lorraine Warren were real paranormal investigators active during the 1970s and 1980s. However, even though The Conjuring 2 does learn towards the belief that the hauntings the Warrens investigated were genuine, it is kind of refreshing that the film does bring scientific skeptics to the foreground, particularly Franka Potente’s character of Anita Gregory, who tries to give a more logical explanation for the events. Of course, it wouldn’t be a satisfying horror film if it turned out that these hauntings were all one giant hoax.

If had to choose between this film and the original, I will definitely say that the first Conjuring is the better film of the two. However, The Conjuring 2 still has some pretty effective scares and if it’s James Wan’s last hurrah in the horror genre, it was a successful one.