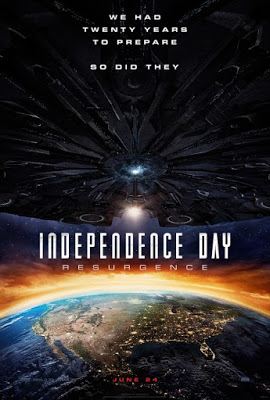 The alien invaders return to Earth two decades after the original attack in Independence Day: Resurgence. Twenty years has passed since the “War of 1996,” during which humanity barely survived an alien invasion. However, in the decades following the war, humanity has come together as one and they have used their combined strength and alien technology to help rebuild the planet.

On a UN mission to Africa, Levinson discovers that the aliens sent out a distress beacon from one of their ships and soon enough a new larger mothership arrives to attack. Everyone flees to the ESD base at Area 51 to mount an offensive against these returning alien invaders.

The original Independence Day was a quite big box office hit when it was released in 1996 and it helped to establish Roland Emmerich as one of the top disaster filmmakers of the last twenty years. Independence Day: Resurgence is Emmerich’s first sequel and the question has to be asked whether the twenty year wait was worth it.

At the very least, the film manages to bring back most of the original film’s cast, ranging from leads Jeff Goldblum and Bill Pullman to supporting characters such as Judd Hirsch as David Levinson’s father, Vivica A. Fox as Dylan Dubrow-Hiller’s mother Jasmine, and even a brief cameo by Robert Loggia as General William Grey, in what’s likely Loggia’s final appearance before his death last year. Probably the most surprising return in the film is Brent Spiner as Dr. Brakish Okun, who was seemingly killed in the last one, but returns here to provide more eccentric comic relief.

Probably the most notable omission to the cast of Independence Day: Resurgence is Will Smith as Steven Hiller, particularly since the original film was the breakthrough that propelled Smith from a TV to film star. Hiller’s character is written out with a single line of dialogue and his role is taken up by his stepson Dylan, played by relative newcomer Jessie Usher. He is joined by Liam Hemsworth (The Hunger Games), Maika Monroe (It Follows), and Chinese actress/singer Angelababy as the young new faces of this sequel. Some of the other new cast members to appear in this sequel include William Fichtner as General Joshua Adams and Charlotte Gainsbourg as Dr. Catherine Marceaux.

Even though Independence Day: Resurgence is not the first sequel to be made multiple decades after the original, the film can be seen as an example why waiting twenty years to do a follow-up isn’t really the best of ideas. Returning cast members Jeff Goldblum and Bill Pullman are both now in their 60s, with the latter looking particularly grizzled as the returning President Whitmore. While the film is trying to focus a bit more on the younger cast, neither Liam Hemsworth or Jessie Usher are all that enticing. Only Maika Monroe stands out from the younger cast, which is ironic considering that their was a minor controversy involving the role of Patricia Whitmore, originally played by fellow up-and-coming actress Mae Whitman, being recast for this sequel. While there may have indeed been shallow reasons why Monroe was cast over Whitman, at least the former managed to make the role her own.

While the era of the Roland Emmerich disaster film has long since passed, Independence Day: Resurgence is fine enough for what it is. However, the film is nowhere near as enjoyable as the original and I found myself not really caring too much for the characters when the attack starts. Speaking of which, while the original film had the memorable sight of the White House exploding, the level of destruction is this sequel comes off as more “matter of fact” than anything else, which is kind of disturbing if you really think about it. Then of course, there is the blatant ripping off of James Cameron’s Aliens, which I won’t get into too much into detail here.

Independence Day: Resurgence is a sequel that has arrived twenty years too late and while it’s a passable action/spectacle, it comes nowhere close to the original blockbuster. It’s also a shame that this film is released with today’s blockbuster franchise mentality, since the film obviously ends with the expectation that their will be a third film. If only it stuck with one.