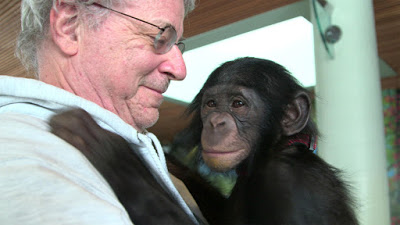 The documentary Unlocking the Cage, opening today at the TIFF Bell Lightbox, follows the crusade of animal rights lawyer Steven Wise and his crusade to get autonomous non-human animals, particularly chimpanzees, to be legally defined as people and the rights that designation affords. The film is directed by the veteran filmmaking team of D.A. Pennebaker and his wife Chris Hegedus. Pennebaker has been an active documentary filmmaker since the 1950s, with his first credit with Hegedus being 1977’s Energy War. The duo are probably best known for their Academy Award nominated 1993 documentary The War Room and D.A. Pennebaker also received an honorary Academy Award in 2013. When Unlocking the Cage screened at this year’s Hot Docs, I sat down with the duo to speak about the film and the slippery slope that is animal rights.

The genesis for Unlocking the Cage came when a friend introduced the filmmakers to lawyer Steven Wise. “He was actually kind of interested in somebody documenting what he does,” says Chris Hegedus. “He told us what he was going to do: Go into a court and try to encourage a judge to consider an animal as a legal person. We had no idea what that meant. It sounded strange and unique and novel and I remember asking him questions like ‘well, what’s going to happen to zoos?’, which now seems so obvious to me. It was just kind of before the time than I think a lot of this more enlightened theory was becoming more mainstream.” D.A. Pennebaker adds that he was surprised how many chimps they were actually talking about. “The space program brought in an incredible number, way overused, because they were going to Mars or something. The fact that there are still a thousand chimps in this country is really amazing.”

Steven Wise fights on behalf of the Non-Human Rights project, which Hegedus notes is the only organization that is truly fighting for animal rights. “There are other organizations that are going after welfare and injustice, but right now they’re the one that’s doing this other approach.” Pennebaker adds that the Non-Human Rights project is looking for more than for people to just be kind to animals. “They are looking for ways in which animals can enjoy their normal autonomy, just like we do.”

However, Steven Wise faces an uphill climb in this fight, since the legal community is hesitant to declare chimpanzees autonomous. “The law doesn’t take nicely to new ideas,” says Pennebaker. “It’s based on such ancient concepts that it is hard to renew it regularly and if you start to renew it then you are put in the position of having to decide to do that regularly and lawyers don’t like to do that.” Hegedus adds that there is a slippery slope in this fight, since any rulings might set a dangerous precedent. “I think you need somebody very brave that can combat the slippery slope argument, because that tends to be one of the arguments that if you do it for this, you will have to do it for all animals and you need to have somebody who has vision.”

One of the challenges in Steven Wise’s fight is differentiating animal rights from animal welfare, since rights are irrevocable. “If you have a right, which people do, you can’t kill your child and eat it and that’s not going to be taken away easily, whereas legislation has a lot of loopholes, you got to have the police see the thing happen, there’s a lot of ifs and fuzzy edges,” says Hegedus. “There are a lot of federal welfare acts and endangered species acts and things like that, that are getting more broad use in terms of protection, but a lot of legal welfare laws are very statewide.”

A major problem that arose in Steven Wise’s fight is that many of the chimpanzee plaintiffs he chose ended up dying in captivity before the case could be brought to court. “It was very sad and a challenge for us as filmmakers, because the story enlarged from one chimp Merlin that we were going to follow his story very quickly to a lot of delays and then three different plaintiff cases,” says Hegedus. “In the end these challenges are mix blessings, because I think it made the film much richer, because you could see how varied the law is with all those different judges opinions on why you shouldn’t make a chimpanzee a person and how they were trying to argue it.”

The ultimate goal of Steven Wise’s goal is to have captive chimpanzees relocated to an animal sanctuary known as “Save the Chimps,” with Hegedus having nothing but praise for the sanctuary and its founder Carole Noon. “She was a visionary and really such a brave person to decide that all these chimpanzees that were being kept, a lot of them from the space program, a lot of them used in bio-chemical research, should all be rescued and she was going to create a sanctuary,” says Hegedus. “They go through incredible chart decisions to acclimate their chimpanzees to different families and make sure they have friends and communities and it’s incredible to go there.  It’s very, very inspiring. I’m sad that none of our plaintiffs in the film have made it there yet.”

In an aside towards the end of the conversation, both Pennebaker and Hegedus make note of how amazed they are at the intelligence chimps show, particularly when it came to their involvement in the space program. “They were able to drive rockets at three and four years old,” says Pennebaker. “Nobody put up any statues for them afterwards, but they really made a lot of the early space program possible.”

“There was one space story about one of the chimps that had been taught a series of buttons or levers to do on the space flight and if he didn’t do it right, it would shock,” says Hegedus. “It malfunctioned and he kept getting shocked, but he knew he was supposed to do it, so he just took the shock and did the correct thing, which I always thought was kind of amazing.”

Unlocking the Cage opens today at the TIFF Bell Lightbox.