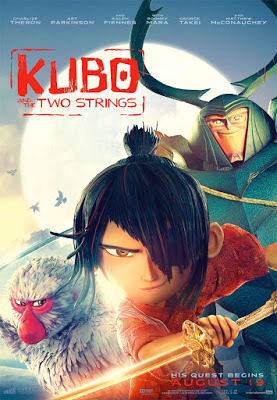 A boy goes on a quest for his father’s samurai armour in Kubo and the Two Strings. Kubo (Art Parkinson) is a boy who lives with his mother in a small village, where he tells stories to the villagers about his samurai father Hanzo, using magical origami controlled by Kubo’s shamisen. One day Kubo ignores his mother’s warnings about staying after dark and he comes in contact with his mother’s twin sisters (Rooney Mara), who want to bring Kubo back to his grandfather the Moon King (Ralph Fiennes). Kubo’s mother magically sends her son to safety before sacrificing herself and Kubo, accompanied by Monkey (Charlize Theron) and Beetle (Matthew McConaughey), must locate his father’s samurai armour in order to stop the Moon King.

Kubo and the Two Strings is set in ancient Japan, where magic is a very real thing. In fact, Kubo is a busker of sorts, who comes into the village every day and uses his magic to tell the story of his father Hanzo for the very eager villagers. However, he always has to return home before he is able to finish the story, since his mother instructed him never to stay out after dark. One day Kubo ignores this warning to participate in the town’s lantern festival and comes face to face with The Sisters, his two masked aunts, who want to bring Kubo to his grandfather the Moon King. Kubo barely escapes the destruction of the village, with his mother’s help, and her magic brings to life the monkey charm he always kept with him. Later on, the two meet Beetle, who was apparently once an apprentice of Hanzo, but is now cursed to take on a bug-like form. The three of them head out on a quest to locate the three pieces of Hanzo’s armour, guided by an origami replica of the samurai.

Watching a film on the scale of Kubo and the Two Strings the question has to be asked how all of this was all done in stop motion? Granted, Laika have been known to use CGI to touch up their films, but the majority of the film was made with the painstaking method of moving puppets one frame at a time. In fact, probably the most amazing part of Kubo and the Two Strings is a time-lapsed behind-the-scenes clip during the credits, showing the animation of one of the film’s larger set pieces.

While ultimately Kubo and the Two Strings is a kids movie, Laika have never been afraid to include dark and scary content in their films, particularly when it comes to their first film Coraline. Indeed, any scene in Kubo involving The Sisters is sure to scare very young children. It is The Sisters, who are the antagonists for most of the film, with the Moon King not really surfacing until the final act.

Since we are living in an increasingly politically correct world, I am surprised that there haven’t been more comments about how the entire main cast of this Japan-set story are voiced by white actors. It ultimately doesn’t matter much, given that Kubo and the Two Strings is an animated film, and the film does feature supporting voice roles by Japanese actors George Takei and Cary-Hiroyuki Tagawa.

While I will say that Coraline remains by favourite of Laika’s films, Kubo and the Two Strings is most definitely the studio’s most epic and ambitious offering.