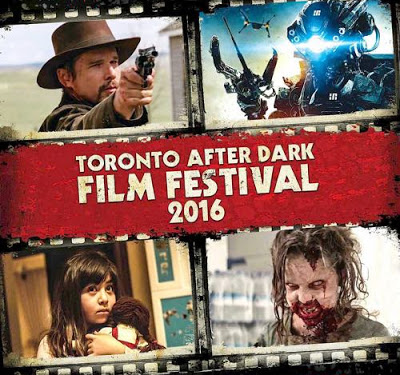 The first ten films of the 2016 Toronto After Dark Film Festival have officially been announced today. Having seen a number of these films at Fantasia, I can assure that this year’s Toronto After Dark line-up will be a particularly strong one. In fact, there is one film in particular that I HIGHLY recommend checking out, even if you are not typically a fan of these type of genre films. Without any further ado, I’m going to break down the first ten Toronto After Dark selections!

UNDER THE SHADOW (Iran/UK/Jordan) Opening Gala Film & Special Presentation
This Iranian supernatural film previously screened in Toronto in August as part of the Lost Episode Film Fest. The fact that Under the Shadow is getting an encore screening as the Opening Gala of Toronto After Dark says a lot about the quality of this film, which I am quite looking forward to watching.
THE VOID (Canada) Closing Gala Film & Canadian Premiere
It was five years ago when Steven Kostanski’s Manborg was unleashed on the Toronto After Dark audience. Kostanski returns for his first film outside of Astron-6, which promises to me a much darker and gorier tale of horror. With me having donated (twice) to The Void‘s IndieGoGo campaign last year, I look forward to watching the finished product.

THE LURE (Poland) Toronto Premiere (Fantasia Review)
I was quite blown away by The Lure when I saw it at Fantasia, with the film ending up being my favourite film of the festival. Mixing elements of teen coming-of-age films, horror, and musicals, I guarantee that The Lure will be unlike anything else that plays at Toronto After Dark this year. Also, the film is directed by a woman, which is a very important thing to emphasize these days.
Here is a trailer for the film, which is sadly not subtitled, but gives a pretty accurate taste of The Lure:

IN A VALLEY OF VIOLENCE (USA) Toronto Premiere (Fantasia Review)
Ti West switches to the western genre for this revenge thriller filled with much bloody violence and dark comedy. Quite frankly, In A Valley of Violence is a lot of fun to watch on screen, with standout performances by Ethan Hawke and John Travolta. Also, there is one hell of a well-trained dog.

Other Films I’ve Seen at Fantasia

AS THE GODS WILL (Japan) Toronto Premiere (Fantasia Review)
Takashi Miike directs this manga adaptation, which is like a very surreal version of Battle Royale. While I don’t think As The Gods Will ranks among Miike’s best, it is still a fine film, with a heavy mix of comedy and violence.
TRASH FIRE (USA) Toronto Premiere (Fantasia Review)
I’m am going to say this right now: This pitch black dark comedy from Richard Bates (Excision, American Gothic) is going to heavily divide audiences. With a completely unlikable protagonist and humour at inappropriate moments, this is a film that is going to push buttons, all before the plot fully gets rolling. I enjoyed this really messed up film, other people won’t.

THE REZORT (UK/Spain) North American Premiere
This year’s obligatory “Zombie Appreciation Night” is described as “The Walking Dead meets Jurassic Park.” That’s enough to at least get me intrigued.
CREEPY (Japan) Toronto Premiere
Acclaimed Japanese auteur Kiyoshi Kurosawa (Cure, Pulse) presents this new thriller, involving the hunt for a serial killer. This film was on my radar at Fantasia, but I ended up missing it, so it will be great to finally see it at Toronto After Dark.
ANTIBIRTH (USA/Canada) Toronto Premiere
This horror-comedy focuses on a woman feeling bizarre aftereffects of an unexplained pregnancy. With the film Prevenge having just played at TIFF, this really seems to be the year for pregnancy horror it seems.
KILL COMMAND (UK) Toronto Premiere
VFX artist Steve Gomez presents this new action film retelling the tried and true story of man vs machine. Looking at the trailer, Kill Command looks like it could be a hidden gem of the festival, with some impressive special effects and action.
That wraps up my breakdown of the first ten films of the 2016 Toronto After Dark Film Festival. The rest of the line-up will be announced by the end of the month and the festival runs from October 13-21 at the Scotiabank Theatre. All-Access-Passes are now on sale (and going fast) and single tickets will go on sale after the full schedule is announced.