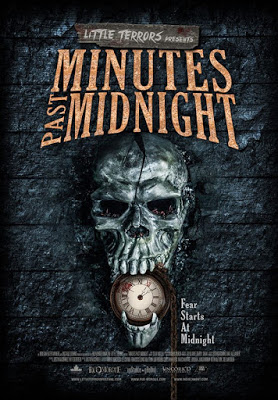 Little Terrors presents the horror anthology Minutes Past Midnight. As midnight falls, all manner of terror invades the Earth: In Never Tear Us Apart, a pair of friends encounters a family of cannibals; In Awake, a boy begins acting strange to the concern of his parents; In Crazy for You, a serial killer has a difficult time finding true love; In The Mill at Calder’s End, a man confronts the evil at his old family home; In Roid Rage, a man has a monstrous case of hemorrhoids; In Feeder, a struggling musician suddenly gains inspiration, for a price; In Timothy, a children’s show host comes to life and wants to play; In Ghost Train, two brothers relive a traumatic childhood experience; Finally in Horrific, a goat breeder battles it out with the mythical chupacabra.

Since 2011, filmmaker Justin McConnell, in collaboration with Rue Morgue magazine, has presented the Little Terrors Short Film Event, which screens a selection of horror short films each month in Toronto. Minutes Past Midnight is the first of a series of horror film anthologies to be released under the Little Terrors banner.

Producers Justin McConnell and Avi Federgreen have curated a selection of nine horror short films from around the world. While some of the shorts featured, such as Never Tear Us Apart, Feeder, and The Mill and Calder’s End, were produced within the last year, most of the selections of Minutes Past Midnight are at least three year’s old, with 2011’s Roid Rage to be the oldest short featured in the anthology. As such, it can be fair to say that Minutes Past Midnight is a bit of a “greatest hits” compilation of Little Terrors, featuring shorts that played throughout its entire run.

Minutes Past Midnight has a structure not unlike ABCs of Death, which askews a framing device in favour of animated opening credits and title cards for each of the shorts. Other than the presentation, the shorts remain their own independent entities, with some even retaining their own credit sequences. As with many anthology films, there are some shorts that are stronger than others, with me personally thinking that the better shorts were in the first half.

I already saw the opening short Never Tear Us Apart twice at various festival screenings and I thought that it made for a strong start for the anthology. Some of my other favourite segments from Minutes Past Midnight are the dark romantic comedy Crazy for You, another short I saw once before, and The Mill and Calder’s End, which is created with some incredibly detailed puppets voiced by the likes of Jason Flemyng and Barbara Steele. Another highlight would be Timothy, which features a killer rabbit with a sledgehammer. If I had to choose the weakest selection of Minutes Past Midnight, it would probably be the exploitation short Roid Rage, which tries perhaps a little too hard to gross you out, despite some well-done gore effects.

In the end, Minutes Past Midnight doesn’t try to be much more than what it is, which is a compilation of horror short films. That said, the film has a fine enough presentation and does work to bring exposure to this collection of short films.