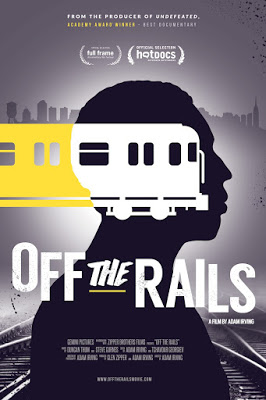 A man with Asperger’s Syndrome spent more than 30 years impersonating train conductors in Off the Rails. Since childhood, Darius McCollum has loved trains. Trains were a place where he could find solace from the bullying he experienced in school. He befriended the subway operators in New York City and at the age of 15 he drove a subway car himself, before he was arrested for hijacking. Darious would spend the next three decades driving trains and buses anytime he could, with him spending more than half his life in prison.

Off the Rails tells the story about a man, whose Asperger’s diagnosis makes it difficult for him to stop his lifelong obsession with driving trains. Darius would just take trains straight from the yard and drive them with perfect knowledge of the system and all the stops. However, despite his mass knowledge of the system, the transit authority refuses to employ Darius because of his history of hijacking, even though he has never once harmed anyone.

Off the Rails is an example of the extremes having Asperger’s Syndrome can take someone. Darius McCollum prefers things over people, particularly after a rough childhood, where he was a victim of bullying in school and was even stabbed by a fellow student. Darius never received proper therapy for his Asperger’s and was often treated more like a common criminal by authorities, rather than someone with mental health issues. In fact, Off the Rails often demonstrates how the justice system often mishandles Darius’ Asperger’s diagnosis, with one judge even determining that Darius didn’t even have Asperger’s, after Googling the symptoms.

While there is an overall lighthearted tone to Off the Rails, the film has a sad undertone, since this man’s life is controlled by his obsession. There is even one point in the film where Darius is compared to character in a Shakespearian tragedy. There is an ever present hope in Off the Rails that Darius would be able to escape his obsession and move on with his life, however it may prove to be difficult for him to accomplish.

If anything, Off the Rails can be used to illustrate the challenges faced by people with Asperger’s Syndrome and how the legal system can fail to project such people. Something really needs to be done, so there can be no other individuals like Darius McCollum, who end up up spending half their lives in prison, just because they happen to like trains.