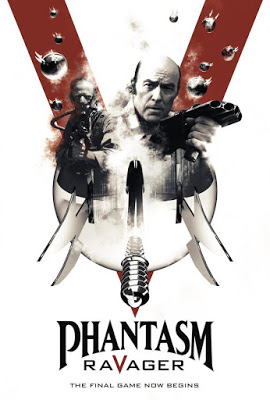 The battle against The Tall Man comes to its conclusion in Phantasm: RaVager. Alone in the desert, Reggie (Reggie Bannister) follows the trail of The Tall Man (Angus Scrimm), in search for his best friend Mike (A. Michael Baldwin). However, along the way Reggie finds himself hopping between various realities, whether it be him in a nursing home with dementia or fighting alongside freedom fighters in a post-apocalyptic future, where The Tall Man has completely taken over the world.

Phantasm: RaVager arrives 18 years after 1998’s Phantasm: OblIVion. Don Coscarelli has stepped back into the role of producer and co-writer, with newcomer David Hartman taking over the directorial duties. Phantasm: RaVager initially entered production around in 2008 as a possible webseries, focusing on the character of Reggie. It was only later when the rest of the cast was brought back and the project became the fifth and final entry in the Phantasm franchise.

Because Phantasm: RaVager began a webseries, the film has a real “cut and paste” feel to it, particularly the first half of the film, where scenes of Reggie at a nursing home talking to Mike were obviously shot many years after the footage of Reggie traveling alone in the desert. The story does eventually come together, as Reggie finds himself in a post-apocalyptic future, where Mike is leading a band of freedom fighters in a last stand against The Tall Man.

Speaking of which, Phantasm: RaVager marks the final performance of Angus Scrimm, who passed away earlier this year at the age of 89. Likely because of Scrimm’s advancing age, The Tall Man isn’t all that prominent in Phantasm: RaVager, though he is still great whenever he is on screen. The film also features some creative and gory sphere kills, even though a lot of the gore is done with some very cheap looking CGI.

While it may satisfy the most hardcore fans of the franchise, Phantasm: RaVager definitely demonstrates that the quality of the series has really gone down in four decades. Of course, this can be attributed to the law of diminishing returns, since not only is this the fifth film in the series, but it is a fifth film made nearly two decades after the last entry. In the end, Phantasm: RaVager is only really worth checking out if you are a series completest.