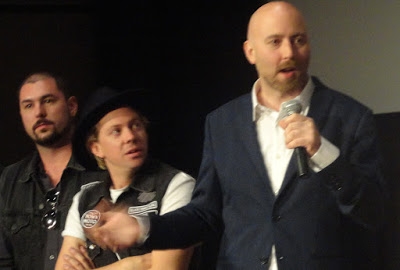 The horror film Bed of the Dead, directed by Jeff Maher, will be having its Toronto premiere tonight at the Toronto After Dark Film Festival. Born in Montreal, Jeff Maher is one of the people behind Guelph, Ontario-based film production company Black Fawn Films, which is responsible for films such as Antisocial, Bite, and Let Her Out. Previously working as a cinematographer, writer, and producer on Black Fawn productions, Bed of the Dead marks Jeff Maher’s feature film directorial debut. I spoke to Maher about Bed of the Dead, following the film’s world premiere this past summer at the Fantasia Film Festival. Please note that interview might feature some SPOILERS for Bed of the Dead and it might be recommended to only read further after viewing the film.

According the Jeff Maher, the idea for Bed of the Dead came out when he was having a conversation with, the film’s composer, Steph Copeland and the subject came up involving childhood fears and being scared of what was under the bed. “We thought that’s interesting to explore, because the bed in the bedroom is like a safe haven,” says Maher. “So, flipping that on its head and saying ‘no actually it’s the worst place you can be’ seemed like a pretty decent jumping point for a horror movie.”
The empire-sized bed, which is the centrepiece of Bed of the Dead, was actually custom made for the film. “[Co-writer/producer] Cody Calahan’s father Mark Calahan built it from scratch,” says Maher. “I think it was three or four weeks to build it.” Mark Calahan also came up with the sinister face-like design on the bed. “We had originally wanted the face of this emperor or something to lean out and look down on the people,” says Maher. “We thought it might come off silly, like it would look like the Burger King or something. So, Mark Calahan just sent us a JPEG of the Tree of Life and we thought that it was appropriate, it comes from the trees and it ties in, it’s like a nice connection.”

Jeff Maher was heavily influenced for Bed of the Dead by the films he watched growing up, such as Friday the 13th and The Nightmare on Elm Street. “I think we wanted to have a bit of an old school vibe,” says Maher. “Even the set design, we went blue walls, red walls, and instead of being subdued and desaturated, we went really punchy and just wanted to go with this retro, fun, 80s style.”
In fact, there is set piece in Bed of the Dead, involving a creature in the sheets, which seems heavily influenced by A Nightmare on Elm Street. Jeff Maher went a bit in detail on what went into creating this creature, which was nicknamed the “Bloody Buddy” on set. “We had Chad, who’s one of the film’s producers, actually put his hand through a sheet with a skull on it and hide under the bed and lift it and he had a tube going up that had blood squirting,” says Maher. “Then we thought that it would be cool to have it really robotic and animated in a way, so we jammed the dolly under the bed and used the boom rail to raise it up. We actually twisted it on the sheet, so when it raised up, it naturally turned and looked at [the performer].”

The plot of Bed of the Dead moves back and forth between a group of kids being terrorized by the titular bed and a police investigation the next day. Because of the low budget of the film, this two-tiered plot structure ended up being quite practical for the production, which only had the use of the single set. “The idea was put forward, let’s set it on fire – we shoot the first half with the kids and then set it on fire and then we will add a procedural element the next day,” says Maher. “Now, we’ve essentially doubled our location and so suddenly we have a procedural and we have these kids.”
As a result of the recycling of the single location, the idea came about for an interdimensional phone call to happen between characters in the different timelines. “We realized that since our lead is innocent, she hasn’t done anything to anger the bed, the rules of the bed are that you need to give a lifeline,” says Maher. “So, the bed allows her to call this police officer and the police officer’s thing is to convince her that she can just get off the bed and she’ll be Ok. So, we figured that it’s kind of like a devil bed type of thing, so it can play around with timelines and do whatever it wants to.”

Bed of the Dead also takes time in the opening prologue to give a backstory involving the construction of the bed. “We had four or five ideas we were working with, one where the guy used blood to stain the bed. He used innocent victims’ blood, because in Germany in the 1910s, they were out of stain because of the war effort,” says Maher. “It was actually Peter Williamson from Breakthrough, he’s one
of the executive producers, who pitched the idea to us about let’s just have
this bed and these ritualistic killings and we thought it was fantastic.”

When it is all said and one, the goal of Jeff Maher and the rest of the crew at Black Fawn Films was to make a film that was full of fun little tributes to the films that they grew up watching. “That’s what I was raised on – Friday the 13th and A Nightmare on Elm Street – and so that’s just where I go naturally when I’m writing or when we’re shooting.”