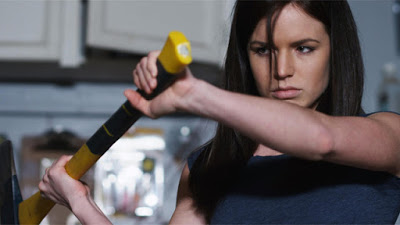 A horror author is tormented by her own character in Inspiration. Samantha Kingsley (Emily Alatalo) is an author who had a huge hit with her horror novel Grinning Charlie. Despite not wanting to write in the horror genre anymore, Samantha is convinced to take a lucrative offer to write a sequel. Samantha moves into an isolated house for inspiration to write her novel. However, when people start turning up dead around her, it seems like Grinning Charlie might have entered into reality.

Inspiration is a thriller that combines the isolated locale of The Shining with a story that is a little more akin to a slasher film. After finding out that her husband Mark (Ry Barrett) was cheating on her, Samantha decides that she needs some time away to write her new novel, much to the sadness of her sister Melanie (Jennifer Polansky). While writing in an isolated house, Samantha strikes up a friendship with her neighbours Lena (Valerie Morrissey) and Maynard (Andrew Roth), as well as a possible romance with her realtor Smitty (Colin Paradine). However, when a local man shows up dead at her front door, it causes Samantha to fear that her story may not entirely be fiction.

Much of the plot of Inspiration has you questioning the sanity of Samantha, as she has hallucinations of the man she believed she accidentally killed, as well as surreal dream sequences of her dressed in white walking through the snow. However, the film ends up being more of a typical slasher film, as a killer dressed in Grinning Charlie’s plague doctor getup begins killing people in the town. While Inspiration is overall a well-produced film, some of the plot developments late in the film do end up being somewhat on the confusing side.