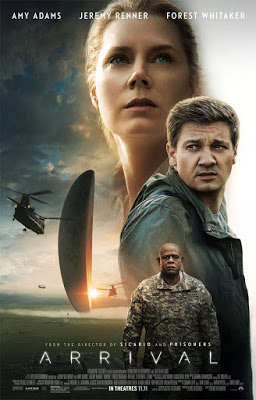 A linguist tries to make contact with alien visitors in Arrival. The world is put on standstill as twelve shell-shaped alien spacecraft land around the planet. Linguist Louise Banks (Amy Adams) is recruited by US Army Colonel Weber (Forest Whitaker) to try and make contact with the squid-like alien species, with Louise being joined on the mission by theoretical physicist Ian Donnelly (Jeremy Renner). Louise and Ian work together to decipher the symbol-based language of the aliens, which they decide to call “Heptapods.” However, with panic spreading around the world, the Heptapods’ intentions must be decoded, before the world’s military powers launches a preemptive strike.

Before he enters the world of Blade Runner 2049 next year, Quebecois filmmaker Denis Villeneuve makes his science fiction debut with Arrival. Based on the short story “Story of Your Life” by Ted Chiang, Arrival tells the story of Linguist Louis Banks, who is brought on to decipher the language of extraterrestrial visitors. While efforts at spoken communication fail, some progress is made in communicating through the aliens written language, created through inky symbols shot out from the Heptapods tentacles. While Louise believes the Heptapods to be benevolent, other such as CIA Agent Halpern (Michael Stuhlbarg) and Chinese General Shang (Tzi Ma) are fearful of the creatures and their true intentions for humanity.

Arrival is a film that comes across as a mix of 1977’s Close Encounters of the Third Kind and 1997’s Contact, with just a dash of Denis Villeneuve’s Enemy thrown in for good measure. Arrival plays out as a “what if” scenario of how humanity would react to a sudden visit by aliens. Not surprising, Arrival plays up the fear of the “other,” with many news broadcasts in the film showing the panic that is spreading throughout society. However, there are also some heavier science fiction themes in the film, which seem to center around repeated flashbacks Louise is having of her deceased daughter. There actually turn out to be a few surprising twists and turns to Arrival, so its a film be seen knowing as little about it as possible.

While Arrival is a relatively simple story focusing on just a handful of characters, it does end up being a masterful and incredibly through provoking piece of science fiction, which also happens to have some quite exquisite cinematography. The end result of Arrival really makes be look forward to what Denis Villeneuve does on a larger scale with the Blade Runner sequel.