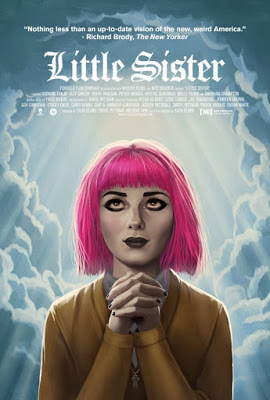 A goth girl turned nun returns home to visit her disfigured older brother in Little Sister. Colleen Lunsford (Addison Timlin) is a young woman about to give her first vows to become a nun. Colleen receives an e-mail from her mother Joani (Ally Sheedy) stating that her older brother Jacob (Keith Poulson) has returned home after being horribly burned by a bomb blast during the Iraq war. This results in Colleen heading back to her hometown to visit her family for a few days, which includes revisiting her past as a heavy metal loving goth girl.

Little Sister is a quirky independent comedy, which can probably be best described as “Garden State with a lot more disfigurement and goth make-up.” The story is set under the backdrop of the 2008 US Presidential Election, with Colleen being a young woman trying to escape her wild past. She always seemed to have a closer relationship with her brother than her parents, particularly her mother, who is suffering from depression. Even though she has committed her life to God, some of Colleen’s old habits begin to return during her visit, including the hair dye and goth make-up.

It can be pretty easy to label Little Sister as the “goth nun comedy,” even though Colleen’s conflicting identities only makes up a small portion of the plot. Another important aspect to the story is Jacob’s horrible disfigurement, which has turned him into a shut in and affected his relationship with his girlfriend Tricia (Kristin Slaysman). Then there is Ally Sheedy as Colleen’s mother Joani, with the character coming across somewhat like a grown up version of Sheedy’s basket case character from The Breakfast Club. In fact, it is the somewhat estranged relationship between Colleen and Joani that creates most of the conflict in Little Sister.

It is probably not much of a coincidence that Little Sister is set in October 2008, as everyone was caught up in Barack Obama’s message of hope. As Obama’s term as president comes to an end, Little Sister can be seen somewhat as a reflection about whether the optimism about Obama was justified or not. From stage plays about 9/11 to the hypocritical praising of Jacob as a hero for not dying in a bomb blast, there is indeed some political satire in the backdrop of Little Sister‘s quirky comedy.

In the end, Little Sister is an enjoyable little comedy about personal identity and the relationship you have with your family.