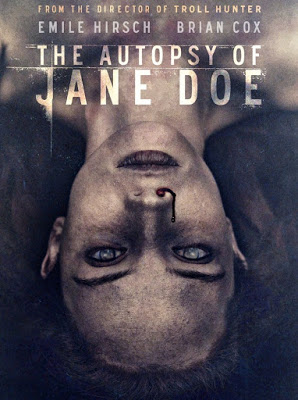 A father and son perform a late night autopsy on a mysterious female corpse in The Autopsy of Jane Doe. At a grisly crime scene, Sheriff Sheldon (Michael McElhatton) finds a body of of a woman partially buried in the basement. Wanting answers to how this woman died, Sheldon sends the body to the Tilden Morgue operated by Tommy (Brian Cox) and his son Austen (Emile Hirsch). As the two perform the autopsy, they are confused about how “Jane Doe” is flawless on the outside, yet completely decimated on the inside. As strange events begin to happen around the morgue, it begins to become apparent that this may not be any ordinary body.

From director André Øvredal (Troll Hunter) comes this supernatural horror film about two coroners, who are asked to perform an emergency autopsy in the middle of the night. At first, there is nothing all that spectacular about Jane Doe, until Tommy and Austen cut her open and find her internal organs absolutely ravaged. All the while, strange sounds and visions begin to be experienced around the morgue, which may be caused by the body that is lying on the slab.

The Autopsy of Jane Doe is an effective horror film that begins as a bit of a mystery and turns into a full-on supernatural shock fest. Practically the entire film takes place in the morgue, with Tommy and Austen being the only characters for the bulk of the film. Much of the plot is built around the father-son dynamic of the two, with Austen being prepped to eventually take over for his father, who is nearing the end of his career. It is for this reason that Austen postpones a date so he can assist his father in this last minute autopsy.

The Autopsy of Jane Doe does not shy aways from the full details of the titular autopsy and it should be noted that the graphic autopsy scenes in the film are probably not for the weak of heart. The second after of the film becomes a more supernatural horror film, with there being an effective use of suspense and jump scares. While the switch from autopsy procedural to supernatural horror might be jarring for some, these elements of The Autopsy of Jane Doe is quite well executed, including the clever use of a bell.

For people who enjoy procedural horror with a supernatural twist, The Autopsy of Jane Doe is definitely worth checking out.