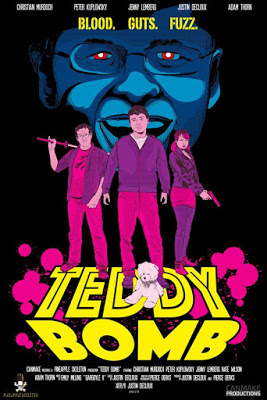 Christian (Christian Murdoch) is a beer delivery boy, who can barely hold together his relationship with his girlfriend Jenny (Jenny Lemberg/Emily Milling), while doing weekly rock’em, sock’em rituals and videogame sessions with his best friend Justin Jay Dawg (Justin Decloux).  One day while making a delivery, Christian finds and takes a small white teddy bear, which happens to be an incredible powerful bomb, set to go off in 44 hours.  Christian must find a way to disarm the Teddy Bomb, while avoiding a group of terrorists, lead by the psychotic Man in the Hat (Peter Kuplowsky).
Teddy Bomb is an incredibly bloody and campy dark comedy, which is a hell of a lot of fun to watch.  In fact, the central premise of a cute teddy bear that happens to be a deadly weapon turns out to be the least outrageous thing to be seen in this film. Throughout the course of Teddy Bomb, there is everything from dreams about the zombie apocalypse to Hong Kong-style gun fights to even hallucinations of squids playing solitaire.  In true exploitation film fashion, Teddy Bomb features much gory violence, featuring everything from machete attacks to sticks to the eye. I don’t think there are any kitchen sinks thrown in the film, but there really should be.
Part of the fun of Teddy Bomb is the teddy bear itself. Voiced by filmmaker Chris Nash, the bear speaks to Christian in a calm and curious manner, despite having very lethal defense capabilities, such as razor fur and laser eyes.  It is also quite fun watching Peter Kuplowsky, best known around Toronto as a film programmer and producer, play what is essentially a self-parody of his fedora-wearing public persona, as the film’s very murderous lead antagonist. In addition, all the dialogue in the film is overdubbed, which works to enhance the overall campy tone of the film.
With his debut feature film, Justin Decloux shows his love of over-the-top exploitation films. Decloux even appears in the film as Christian’s martial arts loving best friend Justin Jay Dawg. I am certain that Justin Decloux will be a filmmaker to watch out for in the world of independent Canadian genre cinema and it will be interesting to see what he does next. Altogether, it is safe to say that Teddy Bomb is a film that is not really meant to be taken too seriously, however it is still a highly enjoyable dark comedy.
9 / 10 stars