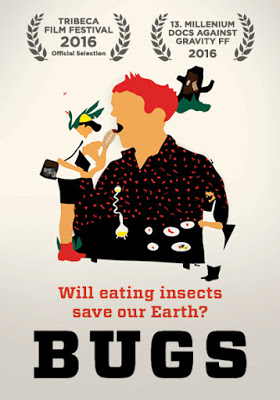 Chefs and researchers explore insects as a culinary option in Bugs. With the population of the world expected to surpass 9 billion by 2050, the Food and Agriculture Organization of the United Nations has recommended that edible insects become an alternative to livestock as a sustainable source of protein. Josh Evans, Ben Reade and Roberto Flore are members of the Copenhagen-based Nordic Food Lab, who travel the world looking at the ways people in Africa, Mexico, and Japan incorporate insects into their diet. However, despite all the benefits of eating insects, there is concern by the researchers that the UN’s recommendation to eat insects is merely a quick fix for a much larger problem.

Probably the most talked about culinary option at the Canadian National Exhibition this past summer was the “Bug Bistro,” which offered food options, such as hot dogs topped with crickets. While this sounds like something you would see on the reality show Fear Factor, the concept of eating insects is becoming an increasingly necessary component of a sustainable food ecosystem.

Bugs follows the researchers from the Nordic Food Lab, as they travel to different countries and try different insect culinary options. Whether it is frying up a termite queen, squeezing honey out of stingless bees or eating cheese filled with maggots, there turns out to be many different ways for humans to eat insects. However, with the current cost of edible insects being quite high, it will be quite a while before we will be seeing insects on our dinner plate.

Probably the biggest issue at the forefront of Bugs is the recommendation by the United Nations that insects be incorporated into the human diet to help sustain an increased need for food, as the world’s population increases. It quickly becomes quite obvious that main subjects Josh Evans and Ben Reade are not a huge supporter of what they view as a “save the world” quick fix that ignores the larger issue about properly distributing food to those who need it. There are also issues that come from farming insects for consumption, such as the blinding lights used to attract locusts.

While there are some dishes prepared in the film that made me cringe, I would say that the ultimate goal of Bugs is to show that insects are not as much as a taboo culinary option as people make them out to be. Indeed, I sampled some edible crickets and mealworms from Canada’s Entomo Farms and I have to admit that I was pleasantly surprised!