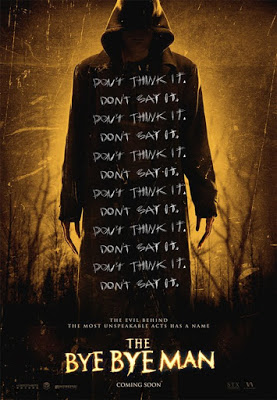 Three college roommates are cursed by an evil spirit in The Bye Bye Man. Elliot (Douglas Smith) is a college student, who rents an old house with his best friend John (Lucien Laviscount) and girlfriend Sasha (Cressida Bonas). Inside the house, Elliot finds an old end table with the words “Don’t Think It. Don’t Say It.” scribbled on the inside of it, as well as an etching that says “The Bye Bye Man.” Elliot and his friends quickly discover that The Bye Bye Man (Doug Jones) is an evil reaper, who curses anyone who says his name and drives them to the edge of insanity.

The Bye Bye Man is a film that almost doesn’t deserve to receive any real attention by way of review, since it is the perfect example of a mainstream horror film that tries to create a cool mythology, while also following every cliche in the book. Indeed, I would describe The Bye Bye Man as a shameless mix of A Nightmare on Elm Street, The Ring, It Follows, The Babadook, and countless other better horror films.

The cast is lead by a group of young unknowns, none of whom I really cared much about. As part of his curse, The Bye Bye Man creates hallucinations, causing people to go insane, the results of which are almost laughable to watch in the film. I guess I am give some props to legendary creature actor Doug Jones, who plays the titular Bye Bye Man, but he is a cool villain in an excruciating movie, who is accompanied by a horrible-looking CGI hell hound. I also feel bad for the career of Carrie-Anne Moss, who has a brief role in this film as a police detective, with her only appearing for a handful of scenes. Then there are flashbacks with Leigh Whannell as a previous Bye Bye Man victim, which seem like they are out of a completely different movie.

The Bye Bye Man is a film that I did not like at all, but it is actually hard for me to express in words why I didn’t like it. I suppose the best way for me to go is to copy the words that are repeated ad nauseam throughout the film. Don’t Think It. Don’t Say It. DON’T SEE IT.