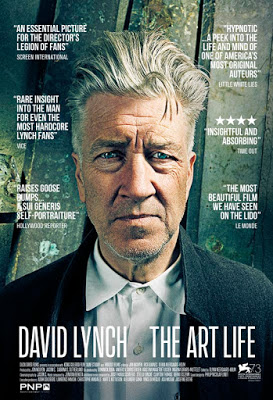 David Lynch tells the story of his early career as an artist in David Lynch: The Art Life. Best known for the films Eraserhead, Blue Velvet, and Mulholland Dr and the television series Twin Peaks, David Lynch considers himself first and foremost to be a painter. Following Lynch at his home, the filmmaker tells the story of his early life and art career in Philadelphia and how it lead towards his eventual filmmaking career.

A follow-up of sorts to the 2007 documentary Lynch, documentary filmmakers Jon Nguyen, Rick Barnes, and Olivia Neergaard-Holm spent over two years filming David Lynch at his home doing his daily ritual of smoking cigarettes, drinking coffee, and painting. In addition, for perhaps the first time in his career, Lynch tells candid stories about his early life trying to make it as an artist. Events in David Lynch’s life inspired his very surreal paintings and eventually would spread into his filmmaking.

Those expecting David Lynch: The Art Life to be a biography about Lynch’s filmmaking career are likely going to end up disappointed. Instead, the film focuses on Lynch’s early life and career from childhood, right until the production of his debut feature film Eraserhead in 1977. As a result, the film focuses more on David Lynch’s painting, which is something that he continues to this day.

In many ways, it can be said that David Lynch: The Art Life is the perfect type of documentary about the filmmaker, since it is a film that doesn’t meet audience expectations. In fact, much of the film just consists of Lynch either sitting around and smoking or working on his highly elaborate painting, which are in many ways part sculpture. The main meat of the documentary are David Lynch’s narrated interviews, where he candidly tells the stories of his early life. If there is any real reason to see this documentary, it would be for those stories. David Lynch built a level of trust with co-director Jon Nguyen, after his work on the 2007 documentary Lynch, which followed the filmmaker as he was producing Inland Empire. As such, David Lynch ends up telling revealing stories, which end up relating to his films, even if Lynch doesn’t know it at the time.