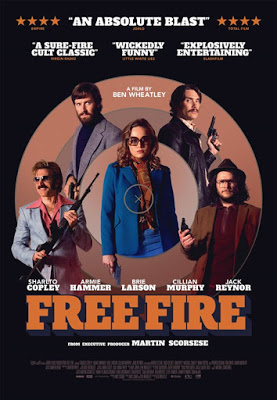 A arms deal devolves into a shootout in Free Fire. IRA members Chris (Cillian Murphy) and Frank (Michael Smiley) arrive at a warehouse in 1978 Boston to perform an arms deal, arranged by their intermediary Justine (Brie Larson). They are soon met by representative Ord (Armie Hammer), who leads them to conduct business with South African dealer Vernon (Sharlto Copley). Despite a few hiccups, they seem to go smoothly in the deal, that is until Vernon’s associate Harry (Jack Reynor) recognizes Frank’s son Stevo (Sam Riley) from an altercation in a bar the night before. Guns are quickly drawn and the two sides find themselves facing off in a large scale gunfight, as the briefcase of money lies in the middle of the warehouse.

The plot of the latest film by director Ben Wheatley (High-Rise) is a relatively simple one to describe: A tense arms deal goes sour and the bullets start to fly. In fact, after the first act set-up, Free Fire is essentially just one giant gunfight, with the characters stopping only to strategize, as they take cover in this large warehouse. While some allegiances are clear-cut, such as Chris and Frank against Ord and Vernon, some of the characters are a little more open ended in who they support, most specifically Justine, who up until this point has been acting as the common denominator between the two parties.

On paper, a film about about a non-stop gunfight sounds like a fun and exciting idea. However, it turns out the Free Fire is just as much about the characters hiding, as it is about them shooting, which is not as exciting to watch. However, I do have to give praise to to the film’s sound design and mixing, with the many flying bullets and scattered voices taking full advantage the surround sound of the cinema. In fact, I would argue that Free Fire is a film that you have to see in a theatre with a good sound system or not at all.

As for the cast of the film, all the characters fittingly blend into the film’s 1970s setting. Arguably the biggest standouts in the film would be Sharlto Copley, who provides most of the film’s comic relief, and Brie Larson, who fully holds her own as the only female character in this story. Then there is Armie Hammer, who is practically acting with his beard alone. Arguably, Cillian Murphy’s Chris is the closest thing Free Fire has to a central protagonist, even though ultimately all these characters are low-level scumbags.

Ultimately, it can be said that Free Fire is like a big screen version of a video game deathmatch, yet I do not get to play along.