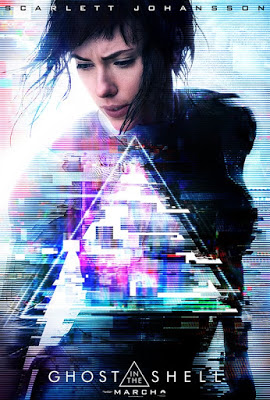 The cult classic manga and anime series is adapted into live action with Ghost in the Shell. Mira Killian (Scarlett Johansson) is a cyborg with a human brain in her cybernetic body, designed by Dr. Ouelet (Juliette Binoche). She is a Major of the anti-terrorist bureau Section 9, where she works alongside operatives Batou (Pilou Asbæk) and Togusa (Chin Han) under Chief Daisuke Aramaki (Takeshi Kitano). Section 9 are currently tracking down hacker Hideo Kuze (Michael Pitt), who is targeting members of the Hanka Robotics corporation headed by CEO Cutter (Peter Ferdinando). However, as Mira learns of Kuze’s motives, she begins to question to whom her allegiances lie.

Ghost in the Shell began as a 1989 Japanese Manga series, which was adapted into a 1995 animated film by Mamoru Oshii, which in turn was followed up by a 2004 sequel. Ghost in the Shell has generated a cult following across the world and its influence can be seen across pop culture, particularly in The Matrix.

Director Rupert Sanders (Snow White and the Huntsman) was brought on board to adapt Ghost in the Shell as a live action film, which was nearly immediately marred in controversy as Scarlett Johansson was cast in the lead role of The Major, who was a Japanese character named Motoko Kusanagi in the original source material. Ghost in the Shell was cited as the latest example of Hollywood whitewashing, where caucasian movie stars are cast as foreign characters.

I won’t deny that Ghost in the Shell is a whitewashed film, even though the film does make the effort to have a multi-racial cast, even if the non-white characters in the film don’t get as much screen time as the leads. At the very least, I can say that the characters in Ghost in the Shell look very much like their animated counterparts, particularly Danish actor Pilou Asbæk as The Major’s lens-eyed partner Batou. Indeed, the live action version of Ghost in the Shell very much retains the visual motif of the source material. However, the film seems to missing the original’s spirit, pardon the pun.

Whitewashing is only one of the issues with this version of Ghost in the Shell, which makes many changes to the source material to tell what is essentially an all new story. Some aspects of the plot that work in animation, don’t quite mesh into live action. This includes the fact that the title of the film refers to the human brain in The Major’s cybernetic body. The many references to The Major’s “ghost” in the dialogue comes off as sort of cheesy, even though there are just as many references in the original Japanese version.

I will admit that Ghost in the Shell was better than I expected it to be and it will say that it is far from the worst example of whitewashing out there, despite an ill-advised third act revelation. However, I highly doubt that I will ever be rewatching this version of the story any time soon.