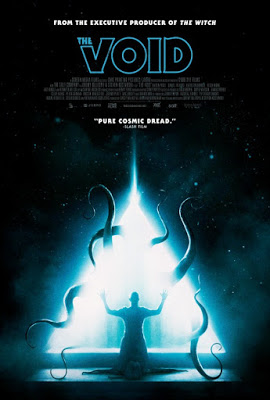 Full Disclosure: I was a contributor to The Void’s Indiegogo Campain

A small town sheriff encounters hellish inhuman creatures at a rural hospital in The Void. While on patrol, officer Daniel Carter (Aaron Poole) finds an injured man on the side of the road. Daniel rushes the man named James (Evan Stern) to the local hospital, which staffed by a skeleton crew, including Daniel’s estranged wife Allison (Kathleen Munroe), intern Kim ( Ellen Wong), and Dr. Richard Powell (Kenneth Welsh). However, soon the hospital is surrounded by hooded cult members and recently deceased patients come back to life as tentacled monstrosities. Daniel and the other survivors venture into the hospital’s basement to unlock the dark secrets of the void.

Best known as members of the film collective Astron-6, Jeremy Gillespie and Steven Kostanski (Manborg) venture off on their own for this dark and violent tale of H.P, Lovecraft inspired horror. Gillespie and Kostanski hold their inspirations on their sleeves, whether it be John Carpenter’s The Thing, Clive Barker’s Hellraiser, or Lucio Fulci’s The Beyond. It also says a lot that Canadian horror icon Art Hindle (The Brood) appears for a small role in The Void as State Trooper Mitchell.

The actual story of The Void is more or less just a way to get all the characters in one place for the horrific events that happen within the hospital, though I do like the simplicity of the hooded cult members and the repeated triangle imagery. One of the driving forces of the plot is Daniel Carter’s relationship with his estranged wife Allison, with her sudden disappearance in the second act being the catalyst that sends Daniel into the depths of the hospital and the creatures that lie within. It’s probably best to leave specific plot details of The Void a surprise for those who watch the film, though I think it would be safe to say that the events happening in this hospital aren’t exactly random, with the revelation of the film’s antagonist happening quite early in the second act.

Those used to the humour prevalent in Jeremy Gillespie and Steven Kostanski’s work with Astron-6 are in for a shock when they watch The Void. This film goes for a very dark and serious tone, as it unleashes a Lovecraftian nightmare in the depths of this hospital. The film features some wonderfully constructed practical creature effects, which emerge from the red-tinted hellish location. In fact, it is the quality of The Void‘s creature effects that makes the film worth seeing, since admittedly The Void‘s early plot set-up isn’t the strongest. However, The Void does end up making up for its early weaknesses when hell finally (and literally) lets loose.