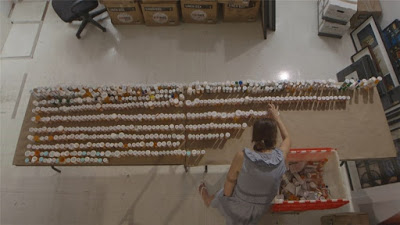 A woman seeks out closure for her older sister’s suicide in 32 Pills: My Sister’s Suicide. In 2008, photographer Ruth Litoff was found death in her Manhattan apartment, after having killed herself. Six year later, Ruth’s younger sister Hope removes her sister’s belongings from storage, with the hope that she can piece together the events that lead to Ruth’s suicide. However, over the course of the investigation, Hope’s own demons begin to resurface.

At one point in 32 Pills: My Sister’s Suicide, director/subject Hope Litoff comments that there is only a small an elite group of people, who have to deal with the pain of a loved one committing suicide. The film not only goes into Ruth Litoff’s lifelong history with depression, and multiple previous suicide attempts, but it also goes into Hope’s status as a recovering alcoholic, especially as the pain brought up by the investigation causes Hope to relapse.

32 Pills: My Sister’s Suicide is a very affecting documentary, which deals with overcoming both grief and survivor’s guilt. While it is pretty much impossible to fully get over the suicide of a loved one, the film at least suggests that the pain can be alleviated by focusing on the positive elements of the loved one’s life, in this case being Ruth’s photography. While this might be a hard watch for people who suffer from depression themselves, 32 Pills: My Sister’s Suicide is ultimately a quite powerful film.