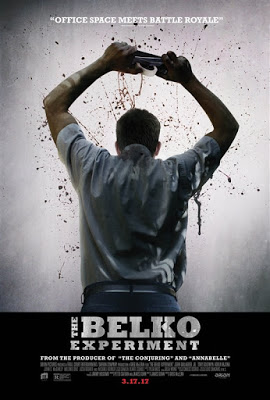 Office workers find themselves part of a deadly social experiment in The Belko Experiment. Shortly after the start of a seemingly average work day, the eighty employees of Belko Industries in Bogotá, Colombia find themselves under lockdown inside their office building. A voice comes on over the PA instructing the workers to kill their fellow employees, with the voice proving itself serious by detonating a charge implanted in four random employee’s heads. While Mike Milch (John Gallagher Jr.) and his girlfriend Leandra Florez (Adria Arjona) try to take a pacifist approach to this experiment, COO Barry Norris (Tony Goldwyn) decides to go with a survival of the fittest mentality, with him joined in his violent crusade by the psychotic Wendell Dukes (John C. McGinley) and the reluctant Terry Winter (Owain Yeoman).

Written by James Gunn (Super, Guardians of the Galaxy) and directed by Greg McLean (Wolf Creek), The Belko Experiment is an office-set horror film highly reminiscent of the Japanese cult classic Battle Royale. Belko Industries seems to be a fairly average non-profit organization, except for the fact that the office is in the middle of nowhere and there seem to be new guards, who are stationing themselves in an abandoned hanger next door. It soon becomes apparent that the company is merely a front for a social experiment, which examines human nature and what drives people to kill.

Similar to James Gunn’s pre-Guardians of the Galaxy films, such as Slither and  Super, The Belko Experiment is a film that is quite violent and sadistic, while also being peppered with a dark sense of humor. While there have been a number of films released in the last number of years that can be compared to Battle Royale, such as The Hunger Games, Gunn seems to have taken major inspiration from Kinji Fukasaku’s 2000 cult classic when writing his script for the film. Not only are the employees of Belko Industries asked to kill each other, but they are also all implanted with a “tracer” in their heads that will explode if they get out of line, similar to the collars in Battle Royale.

While most of the employees at Belko Industries can be seen as just faceless redshirts, the film quickly establishes the major players who you would expect to survive for most of the film. This includes the pacifist protagonist Mike Milch, who would rather try and find a nonviolent solution to this problem. This puts Mike at odds with cold-hearted COO Barry Norris, who just wants to survive the day at all costs. The cast also features a few James Gunn regulars, such as Michael Rooker as handyman Bud Melks, Sean Gunn as paranoid stoner Marty Espenscheid, and Gregg Henry as the mysterious voice of the PA system.

The tension of The Belko Experiment builds throughout the film, finally leading towards a very bloody climax, where all hell lets loose. Being set in an office, the film comes up with some very unique methods to kill people and the action doesn’t flinch and showing you these deaths in their full gory glory.

While there probably wouldn’t another film that tops Battle Royal in its balance of social commentary and violence, the bloody carnage of The Belko Experiment still made it worth my time.