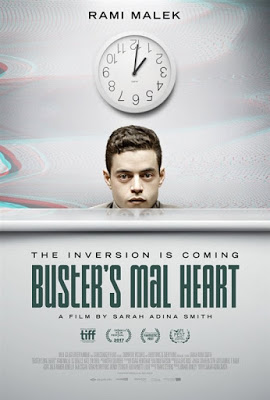 A hotel concierge becomes obsessed with the end of the world in Buster’s Mal Heart. A crazed bearded mountain man, nicknamed Buster (Rami Malek), in on the run from authorities, surviving the wilderness by breaking into cottages. Buster was once known as Jonah, the concierge of an isolated hotel, who has to work night shifts, keeping him away from his wife Marty (Kate Lyn Sheil) and young daughter. One night, a mysterious drifter (DJ Qualls) comes to the hotel and spouts conspiracy theories that coming of Y2K will brink about an apocalyptic event known as The Inversion. The events that follows will forever change Jonah’s life.

Buster’s Mal Heart is a science-fiction tinged drama starring Rami Malek (Mr. Robot) as Jonah, who later becomes known as Buster the Mountain Man. The plot of the film seemingly moves back and forth between three time frames. The main plot follows Jonah, whose encounters with a conspiracy-obsessed drifter slowly causes his life to fall apart. In the other plot line, presumably taking place month’s later, Buster is living in the wilderness, bring into people’s home and making conspiracy-rants about The Inversion to call-in shows. Then there is a third plot that see Buster, speaking only Spanish, adrift in a lifeboat in the middle of the sea.

Buster’s Mal Heart is a film that starts off seeming relatively straight forward and turns into a bit of a mind-twister by the end. There are similarities in the plot to both Rami Malek’s TV series Mr. Robot and Richard Kelly’s Donnie Darko. There are some weird plot twists in the latter parts of Buster’s Mal Heart, which will likely leave some viewers scratching their heads.

Buster’s Mal Heart doesn’t hit you over the head with its science fiction elements, though there seems to be some quantum physics at play with the film. It is interesting that director Sarah Adina Smith made the film a period piece, presumably set in 1999 under the backdrop of the worries about Y2K. The central event of The Inversion is explained in the film both by a science show Jonah is watching on TV, as well as the conspiracy theories given by the mysterious drifter that comes to Jonah’s hotel. Ultimately, Buster’s Mal Heart is the type of film that is really open to interpretation.

Even though he was working on this film before Mr Robot, I do have to say that Rami Malek comes pretty close to typecasting with his role in Buster’s Mal Heart. However, that isn’t really a criticism, since the film still tells a relatively interesting story.