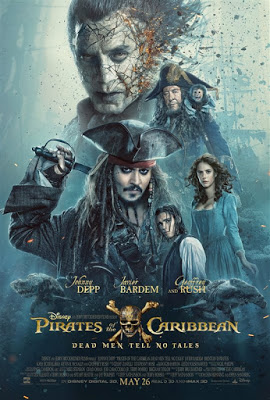 Captain Jack Sparrow avoids vengeful pirate ghosts while searching for the Trident of Poseidon in Pirates of the Caribbean: Dead Men Tell No Tales. Henry Turner (Brenton Thwaites), the son of Will Turner (Orlando Bloom), is desperate to locate the Trident of Poseidon, which has the power to break all the curses of the sea, hence freeing his father’s fate as the captain of the Flying Dutchman. Henry seeks the help of Captain Jack Sparrow (Johnny Depp) to find the trident and they also receive the assistance of astrologer Carina Smyth (Kaya Scodelario), who is looking for the Trident for her own reasons. However, on their trail is the vengeful ghost Captain Salazar (Javier Bardem), who enlists the assistance of Captain Hector Barbossa (Geoffrey Rush) to locate Jack Sparrow.

It is hard to believe that it has now been 14 years since 2003’s Pirates of the Caribbean: The Curse of the Black Pearl defied expectations and made a quite enjoyable film, based on a Disney theme park ride. After the initial Gore Verbinski directed trilogy, the series continued with 2011’s Pirates of the Caribbean: On Stranger Tides, directed by Rob Marshall, followed six years later by this new entry directed by Norwegian filmmakers Joachim Rønning and Espen Sandberg (Kon-Tiki).

It would be an understatement to say that this franchise is now starting to show signs of fatigue in its fifth entry. Johnny Depp’s character of Jack Sparrow has practically devolved into self-parody and the former Oscar-nominated character is now one of the least appealing aspects of this series. Also, problematic in the film is the eighteenth century sexism aimed towards lead female Carina Smyth, who is repeatedly called a witch because she is an intelligent woman of science. Also don’t get me started about the film’s Horology joke.

Putting aside the fact that the film uses misogyny as a plot element, Pirates of the Caribbean: Dead Men Tell No Tales demonstrates how the series is now pretty much on autopilot. Supernatural villain? Check. Treasure to set the plot in motion? Check. Jack Sparrowisms? Double check. In fact, it is more than obvious that the characters of Henry Turner and Carina Smyth are an attempt to recreate the dynamic between Will Turner and Elizabeth Swan from the original trilogy, both of whom appear in this film in brief cameos.

If there is anything notable about antagonist Captain Salazar its that he is probably the most digitally enhanced of the series’ villains, with his ghostly appearance being somewhat reminiscent of the skeleton pirates from the original film. Speaking of which, this film features some major character developments for Geoffrey Rush’s Captain Barbossa, who has progressed from the original antagonist to a character that’s a lot more intriguing than Jack Sparrow. Also, there is a somewhat ridiculous cameo in the film by Paul McCartney, which serves little purpose other than a tongue-in-cheek nod to the earlier appearances by Keith Richards.

While you can obviously tell that Pirates of the Caribbean: Dead Men Tell No Tales is not without its problems, I still thought that the film turned into a pretty fine send-off for this series. Of course, the post-credits stinger suggests otherwise.