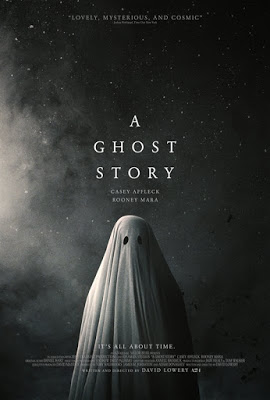 The ghost of a man observes life in his home following his death in A Ghost Story. C (Casey Affleck) is a musician living in an old house with his wife M (Rooney Mara). C tragically dies in a car accident and reemerges as a white sheet covered ghost. C’s ghost returns to his house and observes as M grieves his loss. However, M soon overcomes her grief and moves out, leaving C’s ghost alone at the house to observe the lives the house’s subsequent occupants.

From writer/director David Lowry (Ain’t Them Bodies Saints) comes this drama that deals with grief, loss, and how people will be remembered when they are gone. The story kicks off with the two protagonists C and M, who live a seemingly loving life together in an old suburban house. After C dies in a car accident, he reemerges as a ghost, who is forced to stand in his old house and watch as M moves on with her life.

It would be easy to assume that the a film with the title of A Ghost Story would be a scary film of some sorts. However, even though the film does have some scenes that play with horror tropes, the film is instead a very artistically done drama that that looks at the ghost of a man, who is just left in his old house to watch time go buy. It is almost comical that David Lowry decided to use a very stereotypical depiction of a white sheet covered ghost, however it does add to the very fantastical tone of the film.

Since, A Ghost Story is primarily about C’s ghost silently observing life in his old house, there is very little dialogue for much of the film. In fact, there is a standout scene in the film, which is simply just a grieving M sitting on the floor and eating an entire pie, which will likely entice some pie cravings for viewers of the film. One of the few dialogue-heavy scenes in A Ghost Story involves a man at a party going on a nihilistic rant about how nobody’s accomplishments really mean anything in the end. This rant ultimately builds on the theme of the film, as C’s ghost is left to watch time go by in his house, even after M has moved out.

Even though A Ghost Story credits both Casey Affleck and Rooney Mara as the leads, neither are really seen for more than a third or so of the film. I’m not sure if Affleck is the one under the white sheet, though C’s ghost undoubtedly has the most screen time in the film.

A Ghost Story is probably not the type of film for everyone, but it is still a very artistic reflection on grief, loss, and how you will be remembered.