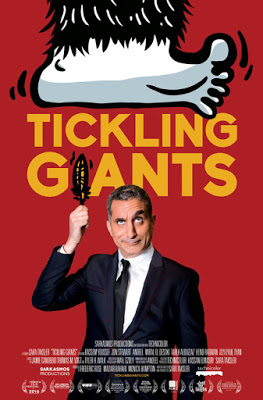 At doctor turned political satirist receives backlash from the Egyptian regime in Tickling Giants. In the wake of the 2011 Arab Spring, Egyptian heart surgeon Bassem Youssef decided to respond to biased media coverage of the uprising by creating his own satirical news program in the style of Jon Stewart’s The Daily Show. Beginning as YouTube videos, Al-Bernameg (The Show) quickly became a TV hit, as Youssef spoke out against both ousted Egyptian dictator Hosni Mubarak and his successor Mohamed Morsi. However, when Bassem Youssef’s satire moved towards the popular General Abdel Fattah El-Sisi, both the media and general public began to turn against the satirist.

It was in 2011 when Bassem Youssef gave up a career in medicine to become Egypt’s answer to Jon Stewart. Through his satirical news program Al-Bernameg, Youssef gave unfiltered opinions about the political climate in Egypt. This made him a highly controversial figure and subject to arrest for his public mockery of the Egyptian regime.

Directed by Daily Show producer Sara Taksler (Twisted: A Balloonamentary), Tickling Giants follows the entire history of Al-Bernameg from its YouTube beginnings to its eventual cancellation. While there is a relatively lighthearted tone to the documentary, which includes fake closing credits and various animated sequences, the film does get quite a bit darker as soon as Bassem Youssef begins to receive major backlash for his satire.

Tickling Giants is also educational about the sequence of events that happened in Egypt following the Arab Spring. Unpopular dictator Hosni Mubarak was forced to resign, only to have Muslim Brotherhood member Mohamed Morsi elected in his place. This eventually lead to General Abdel Fattah El-Sisi staging what was essentially a coup, switching Egypt from one militaristic dictator to another in only a few years. Bassem Youssef was one of the only media personalities not willing to be a puppet for the regime, which is eventually what nailed the coffin shut on Al-Bernameg.

After watching Tickling Giants, it is obvious that we often take political satirists like Jon Stewart, Samantha Bee, and John Oliver for granted. These individuals are able to speak out against political leaders, without any major fear of repercussions. The experiences of Bassem Youssef shows that free speech is a right that is not often available in non-western countries. All this former heart surgeon wanted to do was to use humour to comment on Egypt’s political climate. However, some just took that satire way too personally.