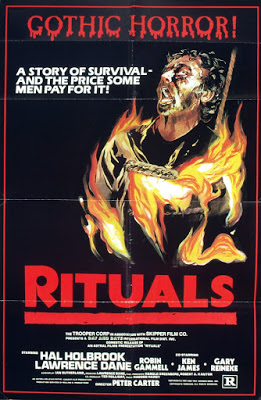 This month I delve into the Canadian tax shelter era with the 1977 wilderness survival/horror film Rituals. Harry (Hal Holbrook), Mitzi (Lawrence Dane), Martin (Robin Gammell), Abel (Ken James), and D.J. (Gary Reineke) are five doctor friends, who go for a camping trip in an isolated stretch of wilderness. After the first night, the the men’s boots go missing, resulting in D.J. to look for assistance at a nearby hydro dam. After subsequent incidents, such as a dead deer being left at the campsite, the remaining men decide to make their way towards the dam. However, it turns out that there is a killer in the woods, who takes these men out one by one.

Many people probably heard the the tax shelter era between 1970 and 1987, since it was almost single-handedly responsible for kick-starting the career of David Cronenberg, who directed his early body horror films, such as Rabid and The Brood during this time period. The tax shelter era saw the rise of many Canadian-produced horror films, with one of them being 1977’s Rituals.

In many ways, Rituals can be seen as the Canadian answer to Deliverance, since it also involves a group of friends encountering terror in the wilderness. As in the case with many films from the tax shelter era, Rituals has a notable Hollywood actor in the lead role, in this case being Hal Holbrook as the character of Henry. Arguably being the most level-headed of the group, Henry takes charge after wilderness expert D.J. goes off on his own to locate help. The five friends are picked off one by one by a killer in the woods, leading to a final showdown at an isolated cabin.

Before Rituals, director Peter Carter was best known for his work with the CBC, so seeing him direct a wilderness horror film was definitely a little uncharacteristic. In the four decades since its release, Rituals has almost become lost to time, with the DVD copy of the film I watched having a very poor transfer, which makes little to know effort to improve the quality of the 35mm source. In some ways, this helps the aesthetic of the film, since it does make it seem like you are watching the film in a Grindhouse somewhere.

However, even though Rituals is typically classified as a horror film, indeed I found out about the film in a book on Canadian horror films, the film actually ends up being a standard wilderness survival film for much of its running time, except you occasionally see one of the five friends’ head on a stick. It’s also interesting watching Hal Holbrook’s Harry essentially turn into Rambo over the course of the film, especially considering this film came out about five years before First Blood.

While the film itself is merely OK, Rituals will probably be best remembered as an (almost) forgotten artifact of a time in Canadian film history that saw the rise of many low budget horror films.