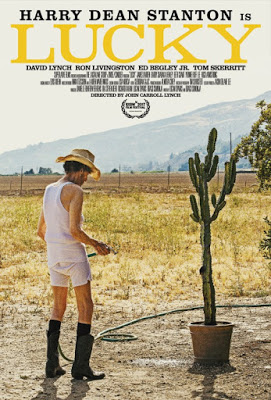 A 90 year old atheist navy veteran contemplates his mortality in Lucky. Living in a small town in the California desert, Lucky (Harry Dean Stanton) has a very specific daily routine, which includes doing the crossword at the local diner run or conversing with his friends at the bar. However, one day Lucky’s routine is disrupted after he unexpectedly falls down. Upon examining him, Lucky’s doctor Christian Kneedler (Ed Begley Jr.) says that he is in perfect health, except that his body is starting to break down with age. With Lucky not believing in the life past this one, this revelation causes him to rethink about the time he has left.

Actor John Carroll Lynch (Fargo, Zodiac) makes this directorial debut with Lucky, which is also the final major film role for actor Harry Dean Stanton, who passed away last month at the age of 91. Stanton stars as the titular Lucky, a curmudgeon of a World War II veteran, who follows the exact same routine every day in the small California town where he lives. Lucky has a small social network of friends, including diner owner Joe (Barry Shabaka Henley), bartender Elaine (Beth Grant), or Howard (David Lynch), who is mourning the disappearance of his tortoise President Roosevelt. Lucky’s very simple life is disrupted when he falls down one morning and comes to realize that his time on this Earth might not be for much longer. As such, Lucky begins to make an effort to somewhat improve his quality of life.

Harry Dean Stanton was best known throughout his career as a character actor who appeared in a wide variety of supporting roles in films such as Alien, Escape from New York, Twin Peaks: Fire Walk With Me, and The Green Mile. However, the actor also had some notable leading roles throughout his career, most notably in Wim Wenders’ 1984 drama Paris, Texas. Screenwriters Logan Sparks and Drago Sumonja wrote Lucky specifically with Harry Dean Stanton on mind and with the film being released posthumously, the story comes off as a loving tribute to the actor.

There is little regards to actual story in Lucky, other than the fact that it details a few days in the life of the titular character. The film begins by detailing Lucky’s very specific daily routine, which includes getting dressed, drinking a single glass of milk from the fridge, drinking coffee and doing crosswords at the diner, buying a new carton of milk, going home to watch game shows and continue the cross word, before finally spending the evening at the local bar. If there is any real conflict in Lucky, it’s the fact that his routine is disrupted somewhat by the revelation that he probably doesn’t have much time left. This adds an added layer to the film, since Lucky is a very staunch atheist, who does not believe that there is anything to come after death. This means that he is forced to make the most of what little time he has left.

Lucky is Harry Dean Stanton’s films through and through, though the film also features some notable actors in small supporting roles. Probably the most notable of these is David Lynch as Lucky’s friend Harold. Despite only appearing in three scenes, Lynch almost steals the film with his lamenting monologues about his missing tortoise. The film also features a reunion between Harry Dean Stanton and his Alien co-star Tom Skerritt, with the latter playing a fellow WWII veteran in a very poignant scene. Then very is Ron Livingston as lawyer Bobby Lawrence, who has an antagonistic relationship with Lucky over the latter’s dislike of life insurance.

Altogether, Lucky is a very solid directorial debut John Carroll Lynch and despite not having much in regards to story, the film is still a quite fitting send off for Harry Dean Stanton.